Steyn, Tahir destroy Pakistan for 99 all out

Pakistan’s joy of winning the first Test at Abu Dhabi was short-lived as they collapsed to 99 all out on the opening day’s play of the Second Test at Dubai.

Pakistan’s joy of winning the first Test at Abu Dhabi was short-lived as they collapsed to 99 all out on the opening day’s play of the Second Test at Dubai. Leggie Imran Tahir demolished his former country capturing a maiden five-wicket haul along with Dale Steyn.

It was a shocker for Misbah-ul-Haq who won the toss and elected to bat first but only to see his side getting bundled out in just one and a half sessions on Day 1! South Africa needed only 36.4 overs to wrap up the Pakistani first innings which began on a dismal note with Dale Steyn removing 1st Test centurion Khurram Manzoor for a duck in the second ball of the match. 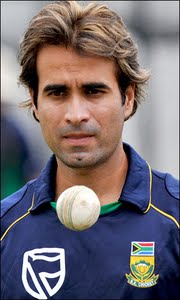 Just a few minutes before lunch, Imran Tahir complemented fast bowlers Morne Morkel and Dale Steyn to reduce Pakistan to 60 for 6. After lunch, the destruction continued from Tahir and co. with only Zulfiqar Babar providing some resistance with an unbeaten 25.

Imran Tahir bounced back in style recording figures of 13-3-32-5. His previous Test match was a nightmare after getting plundered for 260 runs in 37 wicketless overs against Australia. Pakistan having got bowled out cheaply for less than a hundred had lost the Test match on the opening day itself. South Africa lost three wickets before stumps but crawling to 128 in 49 overs on the board to move into the lead. Skipper Graeme Smith has worked his way to some form, scoring an unbeaten 67. Saeed Ajmal has taken two wickets while Zulfiqar Babar has taken one for the Pakistanis.