South Africa pacer Dale Steyn is among the latest to come out and pay tribute to the recently retired AB De Villiers. In ESPNCricinfo’s Cricket Monthly

South Africa pacer Dale Steyn is among the latest to come out and pay tribute to the recently retired AB De Villiers. In ESPNCricinfo’s Cricket Monthly, Steyn termed de Villiers as one of the major reasons why South Africa rose to the number one ranking in Tests.

“His excellence rubs off on other people. When you are in the company of greatness, there is only one thing to do: to raise your game. I actually sent him a message and said to him: I don’t think I would be half as good as people think I am if it wasn’t for him being in the team. Without him even knowing, he made more than half the players in our team excellent players,” Steyn said. 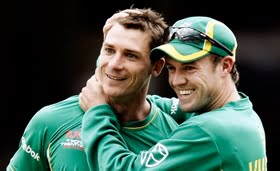 “One of my highlights of being a Proteas player is that at one stage we were the No. 1 team across all formats. That was under Gary Kirsten as coach, but I can guarantee that team wouldn’t have achieved such great heights without great players like AB. That was the ability of AB – to be able to raise everyone’s game with incredible intensity. That is another unique skill he has,” Steyn further said .

Steyn and de Villiers made their Test debuts together in 2004 against England.