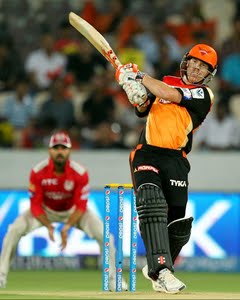 Opting to bat first, David Warner top scored with 52-ball 81 runs to lift Hyderabad to a mammoth score of 185/5. Bowlers did struggled to put the ball on the right spot in the later stage of the inning, but Bhuvneshwar Kumar made sure that their team would restrict visitors at 180/7. Warner and Dhawan ensured that home team would get to off a quick start but Glenn Maxwell broken the partnership when he got rid of Shikhar Dhawan stumped by Saha. The pitch had enough assistance for the spinners who flight the ball and bowl slow. But Punjab’s bowlers disappointed all by not bowling fast and not giving the ball enough air to earn assistance after pitching. Apart from Warner, Henriques and Morgan were the other contributors for the home team, who not allowed to momentum to run away.

Bowling was not up to the mark for the Kings. They used six bowlers and all conceded at more than eight per overs.

Chasing 185, Punjab started on a high note with some handsome shots against Trent Boult. Openers put 42 runs for the first wicket before Bipul Sharma halted their journey by pushing Murali Vijay to play a loose shot, staright in the covers. Bipul struck again in his second over when Manan Vohra was caught by Bhuvneshwar at long on. Glenn Maxwell didn’t looked settle either. He tried to play too many shots early in his inning against spinners. Miller was the lone warrior for the Kings as he didn’t get any support from the other end. He saw his mates coming and going from the other end. Saha(5), Maxwell(11), Bailey6(), Gurkeerat(3) and Axar(15), no one really capitalize and supported Miller. Kings XI Punjab again came out on ground without the veteran Virendra Shewag and they have officially release Mitchell Johnson and Shaun Marsh for rest of the IPL 8 now.

Moises Henriques (3/16) and Bipul Sharma (2/13) was the pick of the bowlers for the Sunrisers Hyderabad.

With this win, Sunrisers Hyderabad have jumped now on the fourth spot on the points table. On the other hand, Kings XI Punjab have already dumped their any kinds of chances of making to the playoffs.

Man of the Match: David Warner