Amid rain playing spoilsport in the World Cup, India and New Zealand, the two unbeaten teams in the tournament, will face off in match number 18 at Nottingham on Thursday. With the weather not holding up, it would be better not to have too many expectations in the build up.

In case, the game goes through, the big focus will be on Shikhar Dhawan's replacement. The opener, who scored a brilliant hundred against Australia, is out with a fractured thumb. KL Rahul, in all probability, will move to the top of the order while either Dinesh Karthik or Vijay Shankar could take Dhawan's place in the eleven. Rishabh Pant is being flown in to England but he is unlikely to feature straightaway against New Zealand. 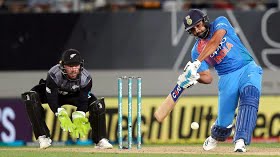 How Dhawan's absence affects his longtime opening partner Rohit Sharma remains to be seen. Rohit has been in brilliant form with hundred followed by a fifty. Virat Kohli too got among the runs in the last game, with a fluent 82. The team think-tank would also be pleased with the finishing touches provided by Hardik Pandya and MS Dhoni. If one takes out Dhawan's injury, there is little to worry for India at the moment in the batting department. Of course, Kedar Jadhav would like a get a bat, and some runs.

Although India did concede a lot of runs while defending against Australia, too much should not be read into it. Bhuvneshwar Kumar was successful in pulling things back at key moments while Jasprit Bumrah, even though expensive, got the big wickets. Yuzvendra Chahal once again proved against Australia that he is a genuine wicket-taker. The one source of worry would be the form of Kuldeep Yadav, who hasn't quite got his rhythm back.

New Zealand will be expected to give India a tough run under the current circumstances. Remember, they easily overcame India in the practice game. But, things would be rather different this time. Their bowling though is very well suited to England conditions as evident from the number of scalps earned by Lockie Ferguson and Matt Henry. Even Jimmy Neesham and Colin de Grandhomme have exploited the conditions well.

New Zealand's top order has been in sublime form in all three games so far with Martin Guptill, Colin Munro, skipper Kane Williamson and Ross Taylor all making significant contributions. However, if India can get through the top four, it would be interesting to see what the others have to offer. It definitely won't be easy for either side in spite of their impressive record thus far. As mentioned earlier though, for now the rains gods staying away would be paramount more than anything else.