A look at the performance of players from South Africa team in Cricket World Cup 2015.

South Africa had a mixed World Cup wherein they lost to India and Pakistan in the group stages, but beat Sri Lanka comprehensively to reach the semis, where they were undone by New Zealand. A look at the performance of players from South Africa.

Hashim Amla (4/10): The South African opener got a hundred in the World Cup, but did not do much otherwise. He failed in all the big games, including the knockouts. 333 runs were his returns. 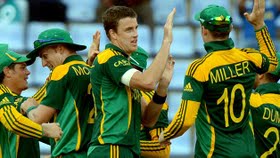 Quinton de Kock (2/10): He had a completely forgettable tournament, managing only 145 runs in the entire tournament, 78 of those came in the quarter finals against Sri Lanka. His poor form hurt the Proteas.

Faf du Plessis (6/10): He was among the few consistent performers for the team. He got a half- century against India, and was among the runs in the semi-finals as well, where he played a crucial anchor role. He ended the World Cup with 380 runs.

AB de Villiers (7/10): The South African skipper led from the front with the bat. Apart from the record-breaking century against West Indies, he also got a 99, and was always scoring quick runs for the team, including the semis. He also chipped in with 4 wickets with the ball.

Rilee Rossouw (5/10): He played a couple of daredevil knocks with strokes full of bravado. But, he could not carry on after crossing fifties. Rossouw made 210 runs in the tournament.

David Miller (5/10): He began the tournament with a century, and smashed a quick 49 in the semis. In between, he couldn't do a lot of damage. Miller had a decent tally of 324 runs.

JP Duminy (4/10): The all-rounder started with a hundred against Zimbabwe, but struggled with the bat thereafter, managing only 164 runs. He got a hat-trick in the quarters, but his total wicket tally was only 6.

Dale Steyn (5/10): He was supposed to be South Africa's spearhead in the tournament, but was a disappointment, finishing with only 11 wickets at a economy of 5.05. He was taken apart by Brendon McCullum in the semis.

Morne Morkel (8/10): He was South Africa's best pacer by some distance. Morne was menacing at times, ending with 17 wickets at an impressive economy rate of 4.42.

Imran Tahir (8/10): The leggie had an excellent World Cup with 15 wickets at an economy rate of 4.07. Impressively, he made an impression against the Asian sides, and was man of the match in the quarters against Sri Lanka.

Kyle Abbott (7/10): Brought into the side following Vernon Philander's injury, Abbott stood out with 9 wickets at an economy of 4.19. He was pacy most times. The decision to drop him for the semis was shocking.

Vernon Philander (3/10): He was battling injuries for most part, and his comeback in the semis was unimpressive. Philander ended with 4 wickets at a economy of 3.93.