Bowlers lead India A to innings win over Bangladesh

After dominating the first two days of the three-day game against Bangladesh, India A completed a terrific win by an innings and 32 runs much before the scheduled close of play on the final day at the Chinnaswamy stadium in Bangalore

After dominating the first two days of the three-day game against Bangladesh, India A completed a terrific win by an innings and 32 runs much before the scheduled close of play on the final day at the Chinnaswamy stadium in Bangalore. Resuming at the overnight score of 36 for 2, Bangladesh crumbled to 151 all out as Ishwar Pandey (3 for 28), Jayant Yadav (3 for 48) and Abhimanyu Mithun (2 for 23) ran through the Bangladesh line up.

Shikhar Dhawan had made a declaration late on day two in the hope of pushing for a victory, and the bowlers did not let him down. Bangladesh needed to bat exceedingly well if they hoped of making India A bat again. But, they did not come anywhere close to achieving that possible target, coming up instead with their second poor batting effort in the match. Skipper Mominul Haque scored 54 and Litton Das made 38, but the rest could not deliver. 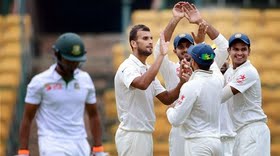 Mominul and Das were the unbeaten batsmen overnight, and featured in a 61-run stand for the third wicket. Things were looking reasonably good for the duo when Pandey clean bowled Das. Pandey did not have to wait long for his next wicket. Just two deliveries later, he trapped Sabbir Rahman, who had scored an unbeaten hundred in the first innings, lbw. Soon, Mithun also got into the act. He began mission destruction by cleaning up Nasir Hossain for 1. And, only a few deliveries later, he had the in-form Shuvagata Hom caught by Yadav as Bangladesh slipped to 87 for 6.

Mominul, who was looking for support, finally got some in the form of Saqlain Sajib, who made 21. The 33-run stand came to an end when Yadav sent back the opposition skipper. Saqlain also fell to the offspin of Yadav even as Bangladesh crossed 150. Ravindra Jadeja hadn't had much to do in the game, but he finished off things by having Jubair Hossain stumped by Naman Ojha. Rubel Hossain was absent hurt and India A were deserved victors.