IPL 8 RR vs KKR 54th match report: They say cometh the hour, cometh the man. In a do-or-die encounter against Kolkata Knight Riders, Rajasthan Royals’ Shane Watson smashed an unbeaten 104 from 59 balls as they won the match by nine runs, and progressed to the play-offs

They say cometh the hour, cometh the man. In a do-or-die encounter against Kolkata Knight Riders, Rajasthan Royals’ Shane Watson smashed an unbeaten104 from 59 balls as they won the match by nine runs, and progressed to the play-offs. Thanks to Watson’s brilliance, and some good support from the in-form Ajinkya Rahane at the top of the order, Rajasthan managed to finish with a healthy 199 for 6. Rajasthan then bowled poorly, but despite spanking cameos from Yusuf Pathan and Andre Russell, followed by an unexpected late assault from Umesh Yadav, Kolkata fell short. 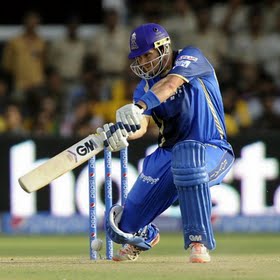 In a match where batsmen made merry, it was clearly Watson’s whose performance stood out for the sheer audacity of the knock. Watson smashed nine fours to go with his five sixes as Kolkata’s bowlers were given harsh treatment. Watson and Rahane featured in a rollicking 80-run opening stand, which set up Rajasthan for a big score. After Rahane was run-out for 37, wickets fell as skipper Steve Smith, Sanju Samson and James Faulkner fell cheaply, but Watson carried on, and joined Brendon McCullum, Chris Gayle and AB de Villiers as the fourth centurion of IPL 8.

Watson began by flicking Azhar Mahmood for fours. At the other end, Rahane got a similar four against Morne Morkel before smashing him over point for an audacious six. When Shakib Al Hasan was introduced, Watson pulled him for a boundary before lofting him for a straight six as Royals made 66 in the first six overs. Rahane went on to hit a Mahmood no-ball for a six, before a mix-up led to his run out. But, Watson carried on. After a couple of quiet overs, he smashed Mahmood for a six and two fours in the 17th over as Rajasthan closed in on 200.

Chasing exactly 200, Kolkata needed a strong start. But, Chris Morris got Gautam Gambhir in the first over, with a short ball that was looped to backward sqaure leg. Robin Uthappa hit a couple of fours, but was out to Dhawal Kulkarni trying to keep up with the scoring. Kulkarni dealt Kolkata with another big blow when he had Manish Pandey caught off a slower ball. In a game where Kolkata needed runs quickly, he disrupted by momentum scoring a run-a-ball 21. Pandey’s dismissal left Kolkata in big trouble at 77 for 3.

Kolkata still had a chance as big-hitters Yusuf Pathan and Andre Russell were at the crease. Both tried their level best, as Russell made 37 from 20, and Pathan 44 for 35. But, the pressure of the scoring rate proved to be their undoing. Russell hit one down the throat of long-off, and Pathan also fell to Watson trying to clear the same area. The match seemed over, when Yadav hit Faulkner for three fours and a six. But, Morris kept his calm to see Rajasthan through.