Bowlers set up easy win for Aussies over Ireland

Australia eased to a 7-wicket win with 29 balls to spare in their Group B Match against Ireland at the R Premadasa Stadium in Colombo. Shane Watson was the Player of the Match for the Australians as he followed up his fine bowling efforts of 3 for 26.

Australia eased to a 7-wicket win with 29 balls to spare in their Group B Match against Ireland at the R Premadasa Stadium in Colombo. Shane Watson was the Player of the Match for the Australians as he followed up his fine bowling efforts of 3 for 26 with a powerful knock of 51 from 30 balls with 5 fours and 3 sixes.

The Aussies got a strong start of 60 in 7.1 overs before David Warner (26 from 23 balls) was caught hoicking left-arm spinner George Dockrell into the outfield. Watson after smacking a fifty got run out because of a tremendous direct hit from Trent Johnston fielding at backward point just with the Australians at 91 for 2 in 10.1 overs. 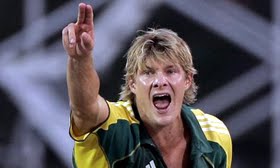 There was another casualty for the Aussies with Kevin O’Brien getting Michael (10) Hussey lbw in the 11th over. The run chase was completed in 15.1 overs though with Cameron White (22* from 19 balls) and Skipper George Bailey (6*) spending some time in the middle.

Ireland Batting: Ireland struggled to reach 123 for 7 against a quality Australian attack on a bouncy track at the R Premadasa Stadium. The innings never got going after a first ball wicket of William Porterfield to Shane Watson.

The Irish lost their second wicket in the 4th over when Paul Stirling got caught at thirdman slashing Mitchell Starc. In the 6th over, Ed Joyce feeling the heat miscued a big shot of offie Glen Maxwell to mid off. By the 8th over, Ireland slipped to 33 for 4 when Gary Wilson was lbw to Brad Hogg playing right across a delivery around middle.

With Ireland slipping towards a low total, the O’Brien brothers got together to put up a fighting partnership. Kevin O’Brien was in superb touch but got out after scoring 35 (from 29 balls with 5 fours), caught behind after trying to upper cut Watson. In the same over, prior to his dismissal, Niall O’Brien (20 from 24 balls) got his woodwork disturbed by a slower leg cutter in an attempted slog.

Ireland from 86 for 6 in 15 overs managed to finish with a respectable total of 123 for 7. Watson, who opened the bowling ended the innings with figures of 3 for 26 in 4 overs. Mitchell Starc took 2 for 20 (4 overs) and the rest of the bowlers all did a fine job for Skipper George Bailey.

Toss and Teams: Underdogs Ireland have won the toss and elected to bat first against Australia in the Group B Match at the R Premadasa Stadium in Colombo. The pitch for this match looks very hard and should be favourable for the batsmen. The conditions are extremely hot and humid at Colombo.