KXIP vs KKR: Punjab's batting let them down again

IPL 8 14th Match KXIP vs KKR Review, Scorecard: There were lots of hopes from Kings XI Punjab at the start of IPL 8 since they were the runners up during the last season. The nucleus of their side has been pretty much the same for this season as well

There were lots of hopes from Kings XI Punjab at the start of IPL 8 since they were the runners up during the last season. The nucleus of their side has been pretty much the same for this season as well. But, in most of the matches that they have played so far, they have not been very impressive. And the chief reason for the same has been their disappointing batting. If you take away the efforts of skipper George Bailey, who has been most consistent, the others haven't been able to live up to reputations. And, this has hurt them badly. 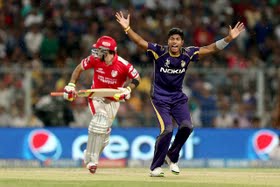 Against Kolkata Knight Riders as well, it was Punjab's batting that let them down. Batting first, their top order was a failure, not for the first time in the edition. Murali Vijay had been getting starts in the earlier games, but on Saturday he fell without even scoring. The lack of runs from Virender Sehwag has also hurt the side. Although he has got a couple of good scores, he hasn't looked in great touch. Another poor score from Wriddhiman Saha meant that Punjab could not gain any sort of momentum.

The only time during the innings when Punjab looked in some sort of control was when Glenn Maxwell and Bailey were at the crease. Both easily negotiated the Kolkata bowling during their stay at the crease. But, the wicket of Maxwell was a big setback for Punjab. Although Bailey continued getting the fours from one end, the momentum remained with Kolkata as Punjab kept losing wickets from the other end. They needed someone to stay with Bailey, but that did not happen.

Speaking of Kolkata's bowling, it was excellent from start to end. All the bowlers chipped in and made an impact. Umesh Yadav was the pick of the bowlers with three scalps while Morne Morkel continued to remain impressive with a couple of wickets while not giving away too many. Andre Russell also picked up a couple of key scalps though he went for a few, while Sunil Narine found some rhythm at last, with his remodelled bowling action.

To their credit, Punjab's bowlers fought extremely hard in spite of a low score to defend. Sandeep Sharma was brilliant, and played the major role in reducing Kolkata to 60 for 5. But, Russell, who hasn't always lived up to his reputation, either in international cricket or T20s, proved on Saturday why he is rated so highly. In a dazzling display of hitting, he took the game away from Punjab rather quickly, aided by Yusuf Pathan. In the end, Punjab were clearly short of runs.