It was expected to be a close game since the series was so competitively fought. The build up made it seem as a perfect finish in the making, with both the sides tied at 2-2. But, it turned out to be quite an anti-climax of sorts at Old Trafford

It was expected to be a close game since the series was so competitively fought. The build up made it seem as a perfect finish in the making, with both the sides tied at 2-2. But, it turned out to be quite an anti-climax of sorts at Old Trafford. England batting first folded up for a meagre 138, with their skipper Eoin Morgan retiring hurt very early on. Mitchell Marsh and John Hastings were the bowling heroes for the Aussies, sharing seven wickets between them. Chasing 139, Australia lost a couple of wickets early. But, Aaron Finch, in the company of George Bailey saw them through to victory.

England were never in the hunt right from the start at Old Trafford. Jason Ray was adjudged lbw twice off Mitchell Starc in the very first over of the innings. The first he reviewed, and was reprieved as an inside edge was found. He did not review the second, but replays found the ball to be heading down leg. Alex Hales completed a miserable series as he hit Hastings straight to point, and was held by a juggling Glenn Maxwell. James Taylor registered his first failure of the series when he edged the same bowler behind the wickets. His dismissal left England reeling at 22 for 3. Worse was to follow though. 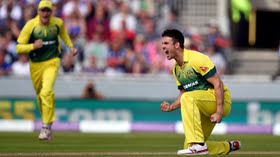 Morgan has just faced a handful of deliveries when he ducked under a Starc bouncer, and was hit at the side of the helmet. He left the field, with England's score still reading 22. There was no relief for England though as Marsh kept up the pressure. He trapped Jonny Bairstow and David Willey lbw with tight line and lengths. Bairstow was given not out initially, but the Aussies reviewed the decision to send him back. Earlier, Moeen Ali was caught behind for 5. Ben Stokes hung around to make a precious 42, under the circumstances. But, he too was undone by Marsh, who claimed another lbw, and left England tottering at 85 for 7.

Wickets continued to tumble for the hosts as Hastings had Mark Wood caught at deep extra cover after England had just crossed 100. Not a lot was expected of Adil Rashid and Reece Topley, but they managed to add 32 runs. Rashid was the more competent of the two batsmen, and ended up unbeaten on an impressive 35, the second highest score of the innings. Topley was eventually out to Ashton Agar, lbw for 6. With Morgan not coming out to bat, it signalled the end of England's innings at 138. Marsh finished with 4 for 27, and Hastings 3 for 21.

Australia batted before the lunch interval, and the wickets continued to tumble. Joe Burns edged David Willey behind for a duck, and Steven Smith did the same off Mark Wood for 12. However, post the lunch break sanity was restored, and Australia had it easy. Finch eased his way to an unbeaten 70 from 64 balls, with 11 fours and a six while Bailey made an unbeaten 41 from 45 with seven fours. Australia eased to the target in the 25th over to clinch the series, and reiterate their ODI dominance.