Netherlands got the better of Namibia by five wickets in a Group A match of the T20 World Cup 2022 at the Simonds Stadium in Geelong on Tuesday (October 18). With this win, the Dutch went to the top of the table in Group A, registering their second triumph in as many games.

Namibia won the toss and decided to bat first, but came up with a very shabby performance with the willow. 121 was all that they managed despite losing only six wickets in their 20 overs. Jan Frylinck top-scored with 43, but it was a slow knock, coming off 48 deliveries. Michael van Lingen contributed 20 at the top, but no other batter could come up with a significant contribution.

Netherlands got off to a terrific start in the chase, as the openers added 59 inside nine overs. Vikramjit Singh blazed away before being dismissed for 39 off 31 balls. Max O’Dowd made a comparatively subdued but equally important run-a-ball 35 before being run out by a direct hit from Namibia captain Gerhard Erasmus. 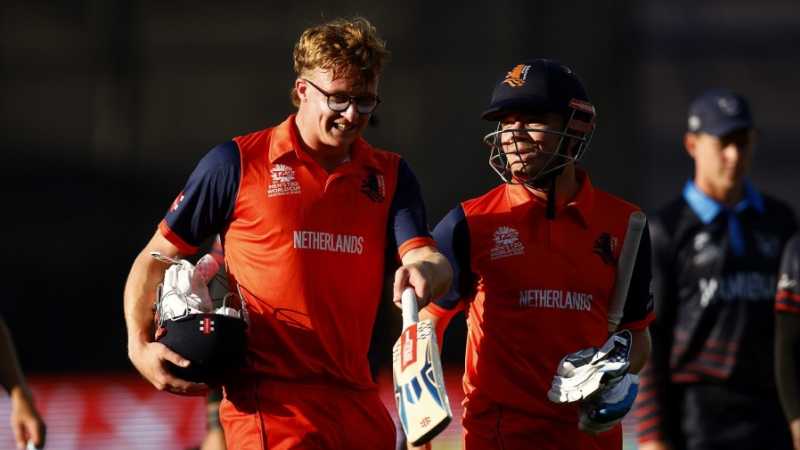 JJ Smit then dismissed Tom Cooper (6) and Colin Ackermann (0) in one over to lift Namibia’s spirits. Frylinck also sent back Netherlands skipper Scott Edwards for 1. At 102 for 5, the Dutch seemed to be losing their way a bit. However, Bas de Leede scored a run-a-ball 30 not out to lift Netherlands to victory in the last over. He was named Player of the Match as he had claimed two wickets with the ball as well.

Netherlands captain Edwards said after another close win, “We're known as a side that plays hard till the last few balls. We did well in terms of front-loading the runs. We knew that Namibia has some good death bowlers in these conditions. It got a bit closer than we'd have liked, but it's still good. It's about now winning that third game of cricket.”

Speaking of his team’s defeat Namibia captain Erasmus stated that batting was difficult for both sides, but admitted that they could have done better. He said, “Never nice to be on the losing side when it's so close. We put a good show in the field. With the bat, it seemed difficult for both sides but they ran better than us. There were enough stages in the game where we didn't put enough contact on the bat and didn't move things better.”