We know how we play. The world knows: Kohli on Bangalore turning things around

A sparkling 82 from 44 balls from AB de Villiers coupled with the 40s from Parthiv Patel and Marcus Stoinis-led Bangalore to a 200 plus score, which they defended thanks to Umesh Yadav and Navdeep Saini, who claimed five wickets between themselves.

Punjab had their chances in the game, but like in a few earlier games, failed to close out things. Lokesh Rahul made 42 and Nicholas Pooran contributed 46 but the others around him floundered as Punjab were held to 185 for 7.

Post yet another win, Bangalore skipper Virat Kohli said losing six matches in a row hurt the team's pride badly and they were desperate to turn things around. After losing six consecutive games, Bangalore have now won four of their last five matches. 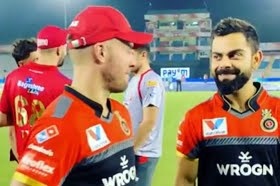 "The only focus was to play well as a team. Losing six in a row really hurt us. Literally, no one in the team has been part of such a streak," Kohli said at the post-match press conference.

"Yeah, we've won four of the five. Could have been five out of five. We were just looking to enjoy cricket and tonight was a great example of having fun. So we just refreshed, thought about just enjoying ourselves and the important thing now is not to take on any pressure. We know how we play. The world knows how we play," Kohli went on to add.

Bangalore only have an outside chance to qualify for playoffs even if they win all the remaining games.