Aussie speedster Mitchell Johnson has announced his international retirement just a fortnight after turning 34. While his decade-long career went through many ups and down, he finished with impressive numbers nonetheless

Aussie speedster Mitchell Johnson has announced his international retirement just a fortnight after turning 34. While his decade-long career went through many ups and down, he finished with impressive numbers nonetheless – 313 wickets in 73 Tests at an average of 28.40 with 12 five-wicket hauls and three ten-wicket match hauls. In one-dayers, he claimed 239 wickets in 153 games at an average of 25.26 with three five-wicket hauls. As the left-arm pacer walks into the sunset, we look back at five of his best bowling performances in the Test arena.

8 for 61 at Perth (December 2008): Although the performance came in a losing cause, it remains Johnson’s best figures in an innings. After Australia had posted a decent 375 batting first, Johnson’s eight-for restricted South Africa to 281. He swung the ball brilliantly, and also used the bouncer to great effect during this performance. His victims included Smith, McKenzie, Kallis, de Villiers and debutant Duminy among others. The match, however, is famously remembered for South Africa’s record chase of 414 as Smith and de Villiers cracked half tons.

7 for 40 at Adelaide (December 2013): This was the Ashes during which Johnson was at the peak of his powers and hence it has surprised many that he has called it quits less than two years since that fantastic series. After Australia had posted 570, Johnson quite literally blew away the English batting with his searing pace and lethal bouncers. He cleaned up Cook early on, and single-handedly ran through the middle and lower order, consuming everyone from numbers six to eleven. 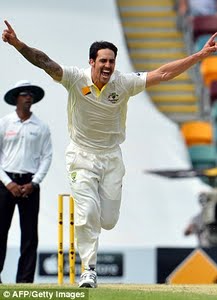 7 for 58 and 5 for 59 at Centurion (February 2014): Johnson continued with his Ashes heroics against the Proteas as well. Again, the batsmen gave Johnson the cushion of a good score, and he broke open the door for Australia. He combined the short ball with pacy deliveries in a deadly mix that caught the South Africans unaware. AB de Villiers made 91 before falling to Johnson’s variation, a slower ball. Set to chase 482 in the final innings, Johnson again starred with a five-for. He dismissed the openers, de Villiers and Duminy to finish with 12 for the match, and the obvious man of the match.

6 for 38 at Perth (December 2010): As it often happens with Aussies, Johnson too had a liking for English batsmen. In this game, he destroyed England with a six-for after the hosts had been restricted to 268 in their first innings. Johnson ripped apart the opponents with the wickets of Cook, Trott, Pietersen and Collingwood. England were held to 187. He claimed three more in the second innings as Australia won by 267 runs.

6 for 73 at Hamilton (March 2010): A Johnson special on display again, this time against another old rival, the one they are currently battling. New Zealand were chasing 479 to win the contest, but Johnson destroyed hopes of them saving the match. He got the wickets of Watling, McIntosh, Taylor, Guptill and the tail to finish off a resolute effort by the Kiwis. This was after he had claimed four wickets in the first inning of the Test.