Australia enter Finals after thumping India by 87 runs at Sydney

Australia have qualified for the CB Series finals beating India by a thumping margin of 87 runs at the Sydney Cricket Ground. India’s batsmen failed yet again, especially the likes of Sehwag and Tendulkar at the top of the order. Australia after having India on the backfoot ensured that the pressure was sustained on them right till the end. (Also read : India restrict Australia to 252 for 9)

Needing a modest 253 to win, India lost an early wicket again when Virender Sehwag (5) got caught and bowled brilliantly by Ben Hilfenhaus off a straight drive on the up in the 2nd over. Sometime after that, Sachin Tendulkar (14) departed too through a tragic run out. The incident happened in the 7th over when Gambhir had patted a rising delivery from Brett Lee infront of point and was called for a single by Tendulkar. However, with Lee moving to his right in his follow through unintentionally, Tendulkar had to run all around him and lost precious moments to get to the batting end. The fielder David Warner threw himself forward to complete the run out to have India at 35 for 2. 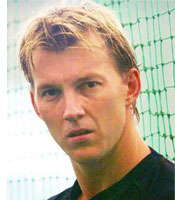 Things still looked fine for India as Virat Kohli joined Gautam Gambhir and played a few handsome shots. In the 16th over, this promising partnership was broken when Virat Kohli (21) whipped Shane Watson right across the line to get caught at mid wicket. In no time, Gautam Gambhir (23) headed back to the pavilion dragging an expansive square drive off Clint McKay onto the stumps to leave India at 83 for 4.

The Aussies picked up two more wickets without much fuss to reduce the visitors to 104 for 6 by the 27th over. Left-handers Suresh Raina (8, edging a drive off Watson to the Keeper) and Ravindra Jadeja (8, slashing a cut off Christian to slip) failed to create any impression with the bat yet again!

India Skipper MS Dhoni scratched around aimlessly for a 49-ball 14 before he was out lbw on the backfoot to a sharp inducker from Ben Hilfenhaus. India strangely was still in the hunt despite being at 126 for 7 in 33 overs as R Ashwin and Irfan Pathan batted better than any of the frontline batsmen! The two all-rounders played some attractive shots before perishing back to the pavilion. Ashwin helped himself to 26 (from 37 balls) before getting a leading edge off Xavier Doherty in a sweep shot.

Irfan Pathan held his own for some time with a good looking 22 (from 22 balls with a four and two sixes) and got out heaving a high full toss from Brett Lee to deep backward squareleg. India folded to 163 in 39.3 overs to concede yet another huge defeat in this Tri-Series. The best bowlers of the evening for the Aussies were Brett Lee with 1 for 26 in 8 overs and Xavier Doherty with 2 for 26 in 7.3 overs. The Man of the Match award surprisingly went to David Warner who incidentally was the top scorer of the day with 68 but threw his wicket away in just the 21st over of the Australian innings. (Also read : India restrict Australia to 252 for 9)