The Royal Challengers Bangalore (RCB) will take on the Mumbai Indians (MI) in match number 18 of the Indian Premier League (IPL) at the Maharashtra Cricket Association (MCA) Stadium in Pune on Saturday. This will be the second match of the double header and will begin at 7:30 PM IST. RCB have played three matches so far and have been highly impressive, winning two of them.

Even in the first game that they lost, they notched up 200-plus. Their two wins have come against the Kolkata Knight Riders (KKR) by three wickets and the Rajasthan Royals (RR) by four wickets. MI have been very poor in every department of the game. After three matches, they are yet to open their account. They lost to the Delhi Capitals (DC) by four wickets, went down to RR by 23 runs before succumbing to KKR by five wickets.

RCB put up a competent performance in the match against RR, who went in as favorites. The bowlers did a very good job to restrict a strong RR line-up to 169. Harshal Patel, in particular, stood out with figures of 1 for 18. With the bat, Bangalore lost their way when Dinesh Karthik and Shahbaz Ahmed played scintillating knocks to stun Rajasthan. 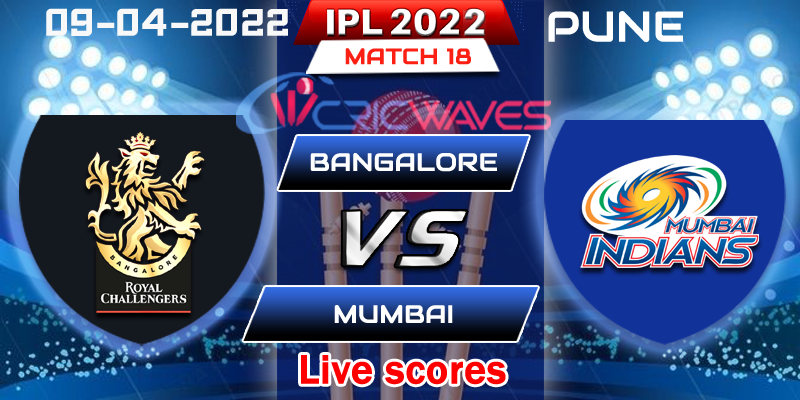 MI were poor with bat and ball in their last game against KKR. Barring a half-century from Suryakumar Yadav and another impressive knock from Tilak Varma, the batting disappointed. Pat Cummins then destroyed the MI bowling by smashing the record-equalling joint fastest fifty. Daniel Sams went for 50 in three overs, including 35 in one. Tymal Mills conceded 38 in three though he picked up a couple of wickets.

Skipper Faf du Plessis has looked good for RCB, but they need runs from Anuj Rawat and Virat Kohli. Glenn Maxwell’s return should bolster the batting. Mohammed Siraj has been a bit expensive with the ball.

For MI, Rohit Sharma’s form will be a concern. In the bowling, they might look to go with Jaydev Unadkat instead of Sams. Not much else they can do due to lack of options.