RR vs DD: Rahane and Nair helped Royals to end their losing streak

The master class inning of Ajinkya Rahane(91) and Karun Nair(61) along with some ordinary performance of Delhi Daredevils in field helped Rajasthan Royal to win the match by 14 runs at Mumbai. The pitch was assisting the bowlers if ball is bowled at the back of the length delivery. Knowing about the pitch both team made the right change in their playing squad. 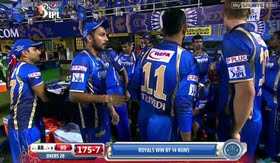 Gurinder Sandhu got his first IPL game in place of Imran Tahir for DD and Rajat Bhatia replaced Ankit Sharma in the Royals squad.

Delhi Daredevils skipper JP Duminy won the toss and elected to field first on the live pitch which has something to offer for the fast bowlers. Ajinkya Rahane and Shane Watson started off their inning very cautiously and looked to settle in before cutting loose. Delhi bowlers were guilty of not bowling the length that required on that pitch and bowled only either short pitch or too full balls. Rahane with his depth touch and some elegance class looked to score his runs at ease.

Shane Watson got out after putting fifty two runs opening stand with Rahane. Watson poked a wide delivery of Angelo Matthews to the wicket keeper. Karun Nair was sent in to bat at No. 3 and he didn’t disappoint anyone. Nair was the leading scorer in his partnership with Rahane. He scored his runs quickly and dominated the bowlers. They were helped a lot by the DD fielders. Lots of catches were dropped and misfield not helped the DD bowlers. Rahane and Nair put on a partnership of 113 runs for the second wickets. Rahane was unbeated on 91 which led Rajasthan Royals to put up an imposing total of 189 runs.

Chasing a score of 190 runs, Delhi didn’t start off their inning in the manner that they would have ideally wanted. Both of their inform openers were back in the dugg out at the score of 32. Duminy and Yuvraj anchored the inning and looked to match up the required rate but the latter perished in trying to pull James Faulkner and was caught by Stuart Binny at the deep square leg. Angelo Mathews didn’t look comfortable at the crease as Faulkner and Watson were biting his bat more than often and he was searching for the ball. Mathews was not able to counter the seam and swing the bowlers were generating and finally caught by Samson off Binny. On the other hand, Duminy was playing the sensibly inning. He was trying to rotate the strike and sending the loose ball in the stands. But he didn’t get any support from the other end what so ever. With 45 runs needed of two overs, Duminy inning came to the end when he was taken at the short fine leg by Kulkarni. The match was literally over then but late onslaught from Saurabh Tiwary diminished the difference between the two sides.

With this win, Rajasthan Royal has jumped on top of the table and Delhi Daredevils retained their sixth spot on the points table.