The Perth ODI was a high scoring encounter, with batsmen from both sides performing exceedingly well on a belter of a pitch. And, while Australia definitely had the advantage of knowing what score they had to chase

The Perth ODI was a high scoring encounter, with batsmen from both sides performing exceedingly well on a belter of a pitch. And, while Australia definitely had the advantage of knowing what score they had to chase, there are more stern lessons for India from yet another defeat. They did not do badly, dominating with the bat, and having the Aussies in early trouble during their chase. But, against strong sides like Australia, you need to be consistent throughout the game, and this is where the Indians were found wanting. Call it lack of self-belief or killer instinct, India definitely have a mental block against Australia.

India must be brutally harsh in the assessment of their defeat at Perth. Though they batted commendably well, there is no way India should have got anything less than 350 after the strong position they had put themselves in. India hasn't lost their second wicket until the 45th over. As such, 309 shouldn't be considered as a below par score. In all fairness to Rohit Sharma and Virat Kohli, they were a bit slow in their acceleration than what ideally should have been the case. At the time of Kohli's dismissal, India were 243 for 2. They did well to cross 300, but it still wasn't enough.

With the change in rules, 300 is no longer a match-winning score. In fact, it is on par with the 250 of the 2000s. This is one area where India have constantly struggled in recent times. On a pitch that had nothing in it for the bowlers, Kohli scored at a strike rate of under a run-a-ball. Rohit did slightly better in that aspect, striking at 104.9. But, what needs to be taken into consideration is the fact that Rohit batted till the very end, and it were late sixes he got that propelled his strike rate into triple figures. These are minute observations, but against world champions you cannot afford to give an inch, as India discovered.

Shikhar Dhawan's form is now getting into the worrisome bracket. Often in the past, he has come out with flying colours while being under pressure for his place in the side. And while that is a great quality to possess, the worrisome aspect for India is that Dhawan is finding himself in such tangles way too frequently. If the merry-go-round with Dhawan's scoring continues, the Indian selectors will have to take a brave call on him. Skipper MS Dhoni too needs to review his batting position as per the needs. He got a quick 18 having promoted himself up the order, but he clearly need to stay on longer for India's sake. 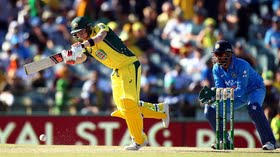 The one plus that India will take out from the Perth loss is the impressive debut performance of Barinder Sran. It is never easy to come to Australia and play your first game. Sran was faced with the massive challenge of bowling to the likes of David Warner and Aaron Finch. He passed the test with flying colours. Sran might not have been playing the game had Mohammed Shami been fit. So, his success is a definite case of seizing the opportunity. If only Sran had received some sort of support from his senior colleagues, he could have put Australia under further pressure. Alas, the Aussies were way too good for India.