Windies snatch victory through Super Over to fancy Semis berth

West Indies overcame New Zealand through a Super Over win to keep their hopes of making it to the Semis alive! It was a thrilling tie at Pallekele for the second time in this tournament with once again New Zealand at the wrong end of a Super Over.

West Indies overcame New Zealand through a Super Over win to keep their hopes of making it to the Semis alive! It was a thrilling tie at Pallekele for the second time in this tournament with once again New Zealand at the wrong end of a Super Over. Sunil Narine got the Man of the Match award for a brilliant penultimate over which forced the Kiwis to get 14 runs from the final over. Marlon Samuels with his controversial quicker ones almost did the job for Windies but for Ross Taylor. Eventually, New Zealand leveled with West Indies at 139 for 7 to take the match into the Super Over.

In the Super Over, New Zealand scored 17 runs off Marlon Samuels. The run chase for West Indies saw a noball in the very first ball from Tim Southee which was hit for a six by Gayle. Windies eased to victory with a ball to spare in the Super Over. 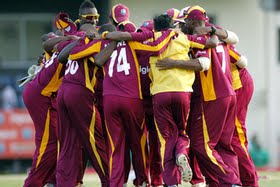 Prior to that New Zealand needing just 140 from 20 overs started off slowly in the first half to come under pressure. By the 13th over, the Kiwis were at 85 for 4 and thus leaving a lot of runs to get in the final overs. Skipper Ross Taylor stayed right till the end but his heroic 62 (from 40 balls with 3 fours and 3 sixes) wasn’t enough to take the Kiwis home. In the end, the Kiwis needing 2 to win from the final ball saw Doug Bracewell getting run out by a direct throw from substitute fielder Dwayne Smith in an attempted second run.

West Indies Innings: Considered to be one of the favourites to win the tournament, West Indies have for the second consecutive time disappointed with their batting. In a must-win situation against the Kiwis, the powerful West Indian batting line up was shot out for 139 in 19.3 overs. It’s a dry pitch at Pallekele but batting isn’t that difficult at all. West Indies clearly played some terrible shots and New Zealand look good to spoil their hopes of making it to the Semis.

Chris Gayle scored a cameo of 30 (from 14 balls with 3 fours and 2 sixes) but when he got caught behind off Southee, West Indies were three down for 61 in 6.2 overs. The momentum all came down and the Kiwis managed to sustain the pressure by reducing them further to 102 for 6 in 13.2 overs. Eventually a couple of boundaries here and there took West Indies to a respectable total but something that looks below par on a decent batting pitch.

Toss and Teams: New Zealand, who are on the brink of elimination from the tournament, have won the toss and asked West Indies to bat first on a dry pitch at Pallekele. West Indies would be looking to win this match and set themselves up for the Semi Finals. New Zealand on the other hand have a very tiny opportunity of making it to the Semis but have the potential of taking West Indies down with them by winning this game!

West Indies have made two changes with Darren Bravo and Samuel Badree replacing the injured Dwayne Bravo and Fidel Edwards. New Zealand have suffered a big blow with Daniel Vettori not playing because of a heel injury. He has been replaced with another left-arm spinner Ronnie Irani. Also Jacob Oram comes back in the XI replacing Kane Wiliamson.