With 35 required off 12 balls, not many would fancy the batting side. But with AB de Villiers at the crease, then the toughest of tasks become seamlessly easy. He carried his team to a fine 7 wicket win as he scored 55 runs in 22 balls, with a four and 6 sixes.

RR did yet another rejig to their batting order, as Robin Uthappa came to open alongside Ben Stokes after Steve Smith elected to bat first. After a couple of quiet overs, Uthappa showed why he belongs at the top of the order as he swept Washington Sundar for four boundaries in the third over. Though Stokes was playing and missing, Uthappa really seemed to have found his mojo as he was striking it sweetly off the bat. Morris scalped Stokes in the last over of the powerplay, at the end of which RR finished at 52-1.

Chahal was given the ball in the 8th over and he dismissed both Uthappa and Samson off consecutive deliveries. Uthappa had hit a quickfire 41 but Samson, after hitting an eye catching six over deep midwicket, holed out to Morris at long off. Buttler and Smith then did the task of rebuilding the innings and scored at run a ball till the 14 over stage, with the score at 108-3.

Smith then started to up the ante by first slashing Udana for two fours, then absolutely smashing Morris for a monstrous six. Morris did however, manage to dismiss the all-set-for-blast mode Buttler to give some respite to RCB. That didn’t stop Smith from improvising against Chahal as he brought up a 30 ball fifty. Tewatia helped himself to a four and a six in the penultimate over against Udana, who was having a forgettable day having gone for 43 in three overs with no wickets to show for. Morris gave away only 4 runs in the final over but also picked up two wickets to finish with figures of 4-0-26-4 as RR gave their opposition a target of 178 runs. 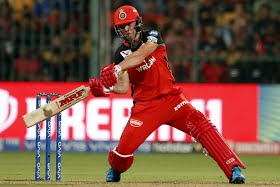 Chasing a above par total, the onus was on Finch for a quick start. In the third over, the Aussie ODI skipper took on Archer to smash him for two solid sixes. Next over, leggie Shreyas Gopal got rid of Finch as he miscued a lofted shot to Uthappa. Padikkal and Kohli made sure to utilize the powerplay as they hit three boundaries in the next two overs.

After that, the boundaries dried up though ones and twos kept coming, courtesy Kohli. Only one boundary came in the next four overs after the powerplay and that too in the last ball of the 10th over. The required rate was then over 10 and both the batsmen tried to go for the big hits. On the last ball of the 13th over, a struggling Padikkal holed out to Stokes off Tewatia. Kohli, who had hit a welcome six in the same over, was caught brilliantly by Tewatia at deep midwicket the very next over.

As ABD and Gurkeerat took some time to settle in, RCB had reached 114-3 with 64 runs still required in the final five. While Gurkeerat struggled to get the big hits going, de Villers started to get in his groove as he hit a boundary in each of the next three overs. Then came the match changing 19th over. Unadkat was smoked for three sixes by AB before Gurkeerat too helped himself to a four. With only 10 required in the final six balls, it turned out to be a cakewalk as de Villiers effortlessly cleared deep midwicket against Archer to give his time a come from behind victory.