It has been often mentioned that Sunrisers Hyderabad possess the best bowling attack in the tournament although they may lack variety. This quality of theirs aided them against Rising Pune Supergiants on Tuesday

It has been often mentioned that Sunrisers Hyderabad possess the best bowling attack in the tournament although they may lack variety. This quality of theirs aided them against Rising Pune Supergiants on Tuesday, as they climbed to the top of the table with a nerve-wracking win. In a series where a majority of the games have been won chasing, a number of them being big scores, Sunrisers were able to defend a relatively low 137 at Vizag. True the pitch was sluggish, and difficult one for batting. Still, the Sunrisers had to be at their very best to defend the total, which they were.

The pace trio of Ashish Nehra, Bhuvneshwar Kumar and Mustafizur Rahman have taken turns to play match-winning roles for the team. On Tuesday, while Nehra picked up most of the wickets, Kumar played a significant role by get a big scalp early. He sent back Ajinkya Rahane in the very first over of the chase, and set up things perfectly for them as they built on the great start. Apart from picking the big wicket, Kumar also kept things tight, while Mustafizur Rahman was economical as well. Again, Barinder Sran also played a key role by keeping things tight, and not allowing the pressure to ease.

Nehra's wickets included those of Saurabh Tiwary and Thisara Perera, both big hitters, who are capable of changing the complexion of a match. Pune would rue the fact that they could not build partnerships that took them towards a successful chase. Rahane's loss was critical, but as was Usman Khawaja's run out. Still, Pune did well to fight back courtesy a sensible partnership between George Bailey and the promoted Ravichandran Ashwin. They rotated the strike well, but not getting the big hits meant there was too much pressure of MS Dhoni and Thisara Perera towards the end, and they fell behind the run rate. 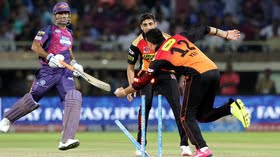 At the halfway stage, Sunrisers would have been disappointed with their batting effort, but in hindsight, they would be quite happy. Shikhar Dhawan has adapted well to challenging conditions this season, and he carried on his good work against Pune as well after David Warner fell early. His hard-fought 33 ensured Sunrisers had something to bowl at. Looking back, Kane Williamson and Yuvraj Singh also chipped in nicely with 32 and 23 respectively. In a low-scoring encounter, the two sixes hit by Deepak Hooda towards the end also proved significant.

Pune would not be too disappointed with their bowling effort. In fact, they would be elated with Adam Zampa's effort, who ended with ended with sensational figures of 6 for 19. His variations proved to be too much for the Hyderabad batsman on a challenging surface. The other spinner, Ashwin, also kept things extremely tight, while Ashok Dinda did a reasonable job of holding back the batsman. At the end of the day though, Sunrisers' bowlers were just that much good, and Zampa's sensational figures won him the man of the match, but Pune were relegated to another defeat.