Australia smashed Sri Lanka 4-1 in the recently concluded one-day series. Cricwaves takes a look at the top performers in the series

Australia smashed Sri Lanka 4-1 in the recently concluded one-day series. Cricwaves takes a look at the top performers in the series. 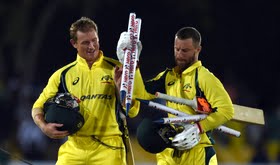 George Bailey: The former Aussie skipper redeemed himself after a brief lull in his career. He was instrumental in Australia’s victory with the bat. He finished the series with 270 runs at an average of 67.50, a strike rate of 75.63, with two fifties. He made 70 and 90 not out in the two chases at Dambulla, and finished the series with 44. In fact, he scored 27 and 39 in the first two games, meaning he never really tasted any failure in the series.

Dinesh Chandimal: The Sri Lankan batsman scored 236 runs in the series at an average of 59, and was one of the few reasons why Sri Lanka managed to compete to an extent in the series with the bat. He made one hundred and a fifty in the series. He made an unbeaten 80 in the first ODI at Colombo, and 48 in the next game, and added 102 in the third match at Dambulla.

Aaron Finch: The Aussie opener managed only 145 runs in the series, at an average of 36.25. But, it was his strike rate of 143.56 that was most amazing. He made 56 from 46 in the opening match at Colombo and blasted 55 from 19 in the fourth ODI at Dambulla. He made sure the Lankan bowlers did not settle in at the start of the innings.

Mitchell Starc: The left-arm seamer was in a league of his own. He was the top wicket-taker with 12 wickets at an average of 18.16, a strike rate of 24.4 and an economy rate of 4.46. Starc claimed three wickets in both the matches at Colombo and finished the series with another three-four in the final one-dayer at Pallekele.

James Faulkner: The Aussie all-rounder once again made an impression with 10 wickets at an average of 19.60, a strike rate of 27.2 and an economy rate of 4.32. Faulkner claimed 4 for 35 in the first match at Colombo, and 3 for 45 in the second ODI at the same venue. Even when not picking up wickets in the last couple of matches, he was economical.

John Hastings: The medium pacer also made an impression with nine wickets at an average of 12.88, a strike rate of 18 and an economy rate of 4.29. He starred with 6 for 45 in the fourth ODI at Dambulla and picked up 2 for 41 in the previous match at the same venue. He claimed 1 for 30 in the final match at Pallekele.