Royal Challengers Bangalore will take on Sunrisers Hyderabad in the mega final of the Indian Premier League at Bangalore on Super Sunday at the Chinnaswamy stadium in Bangalore. This being the winners take all game, no side would really go in as favourites. For the record though, Bangalore have the momentum with a five-match winning streak going into the final. Hyderabad, on the other hand, had a rather consistent run in the league matches but lost a few matches going into the playoffs. They played well though to beat Kolkata Knight Riders in the eliminator and Gujarat Lions in the second qualifier.

Bangalore have been heavily dependent on their skipper Virat Kohli in the tournament, and he has rarely let the team down. But, in the qualifier against Gujarat Lions, it was AB de Villiers who stood up to the challenge. De Villiers were in huge trouble in the match when the batsman walked in. But, he played an absolutely stellar knock to guide the team home, literally from a no-win position. Bangalore would be looking forward to another huge effort from the South African on the big day. Kohli experienced a rare failure in that match. But, he has, by far, been the best batsman on show, and will be raring to go again.

Bangalore have a few other match-winners in their kitty, who will be keen to make an impression as well. Chris Gayle has only played a couple of innings of note in the series so far. But, if he can fire in the final all his previous failures will be forgotten. Lokesh Rahul has played some very good knocks to cover up for Gayle while Sachin Baby has made a couple of crucial contributions lower down the order. The bowling was a massive worry for Bangalore earlier in the tournament, but of late they have done reasonably well. Yuzvendra Chahal has once again been their star performer while Shane Watson has also been among the wickets although he has been expensive.

For Hyderabad, the first half of the series was all about David Warner singlehandedly leading them to wins. There was a significant improvement in the second half of the league stage as the others also chipped in. But, things came to square one in the second qualifier, as it was again left to Warner to take the team home. His unbeaten 93 was a brilliant knock in every sense, and the kind of innings that deserved to take its team into the big final. Hyderabad should also be pleased with the manner in which Bipul Sharma kept his cool under pressure and hit three big sixes to aid his skipper in a memorable come from behind victory. 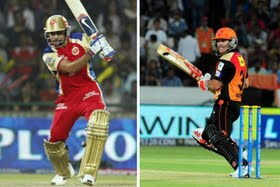 Hyderabad will need a few other players to put their hands up on the big day. Shikhar Dhawan ran himself out in a silly fashion on Friday, but he has played some handy knocks in the series, and will be keen to carry on the same form into the final. Moises Henriques rose to the occasion with a good all-round effort in the previous game, so the team should be pleased with his effort. In the bowling department, Hyderabad will be hoping for Mustafizur Rahman to be fit, for he has been the star performer for the team. Bhuvneshwar Kumar has also done very well. The contest is widely expected to be one between Hyderabad's bowlers and Bangalore's batsmen.