South Africa will take on West Indies in match number 18 of the T20 World Cup 2021 at the Dubai International Cricket Stadium on Tuesday. The match will be played as part of Group 1 in the Super 12 round of the ICC event. The game will begin at 3:30 PM IST and 2:00 PM local time.

The contest on Tuesday will be significant for both South Africa and West Indies. The Proteas began their campaign with a disappointing performance against Australia and went down to their old rivals by five wickets in Abu Dhabi. It was the batting that let South Africa down on the day. They looked nervous from the very start and never got into any sort of rhythm. South Africa lost half their side for 80 for 5 and, eventually, crawled to 118 for 9. The bowlers fought hard but there weren’t enough runs on the board.

If South Africa were poor, West Indies were abysmal. The defending champions crumbled to an embarrassing 55 all out against England. Only one Windies batter got into double figures as the batting line-up exploded. The batters kept getting out playing wild slogs and never attempted to put up a fight. The bowlers gave West Indies some semblance of respectability, picking up four wickets, but it was a forgettable performance nonetheless. 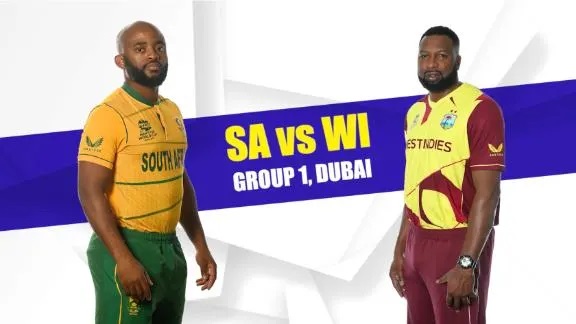 South Africa are not expected to change the line-up after one game. But it was only Aiden Markram who stood up to the Australian challenge. More will be expected from Quinton de Kock, Temba Bavuma, Rassie van der Dussen and David Miller.