India's four-match winning run in the Women’s World Cup came to an end on Saturday with a 115-run loss against South Africa.

India's four-match winning run in the Women’s World Cup came to an end on Saturday with a 115-run loss against South Africa.

South African captain Dane van Niekerk starred with 57 off 66 balls as South Africa made 273 for nine. Then, she also took four wickets with her leg-spin as India were skittled out for 158 in 46 overs. Earlier, opener Lizelle Lee smashed 92 off 65 balls. This was after India put the Proteas in at Grace Road.

India now face Australia and New Zealand as they look to seal a birth in the semi-finals. India collapsed to 56 for six in the 17th over to pretty much end the game. Deepti Sharma’s 60 off 111 balls and Jhulan Goswami’s unbeaten 43 ensured India at least crossed 100. 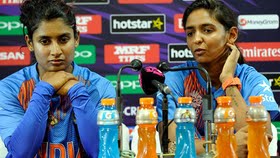 Opener Smriti Mandhana, who made 90 and 106 in the first two games, again fell early. Another big blow came when captain Mithali Raj fell for a golden duck while Harmanpreet Kaur too fell for a duck, both falling to Niekerk.

Lee hit 10 fours and seven sixes. She missed out on a hundred, trapped in front of the stumps by Harmanpreet, who claimed 2 for 18.

India hit back well after that, but Niekerk was too good for them on the day.