Australia has named the uncapped Glenn Maxwell in its squads to face Pakistan in next month Series in the UAE. The 23-year-old Glenn Maxwell is an all-rounder, who strikes the ball very hard and chips in with handy off-breaks.

Australia has named the uncapped Glenn Maxwell in its squads to face Pakistan in next month Series in the UAE. The 23-year-old Glenn Maxwell is an all-rounder, who strikes the ball very hard and chips in with handy off-breaks. To his credit, the 23-year-old Victorian has already played for the Delhi Daredevils in the IPL, Melbourne Renegades and Hampshire ever since making his debut in competitive cricket in 2010. Maxwell finds himself in both the ODI and the T20I Squads to play against Pakistan and also in the one-off ODI against minnows Afghanistan. 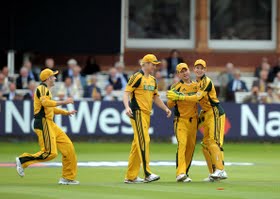 Talking about Maxwell’s selection, John Inverarity, the National Selector is quoted to have said: “Glenn Maxwell is a relatively inexperienced player who debuted for Victoria in 50-over and T20 cricket in the 2009-10 season and in the Bupa Sheffield Shield the following season. He’s a versatile and lively off-spinning all-rounder and brilliant fieldsman that has caught the eye of the NSP. An injury last January somewhat halted his progress but in recent months he has impressed in the IPL and with Hampshire. Glenn will provide another spin bowler option on the slow, low, turning wickets in the UAE.”

Meanwhile the Aussies have recalled middle order batsman Callum Ferguson with Peter Forrest getting the axe. Veteran middle order batsman Michael Hussey returns to the team after missing the England tour because of the birth of his child. All-rounder Shane Watson, who is recovering from a calf muscle strain has been left out and so is the bulky fast bowler Ben Hilfenhaus from the ODIs. Both Watson and Hilfenhaus have been included in the T20 Squad though.

Coming to the T20I Squad, Australia have retained George Bailey as the Skipper with former T20 Skipper Cameron White being given a comeback opportunity by the Selectors.

The Aussies play a one-off ODI against Afghanistan on August 25th followed up by three ODIs and three T20Is against Pakistan in the UAE.