A struggling Australian team managed to force a draw in their 5-match ODI Series against Sri Lanka with a comprehensive 32-run win in their do-or-die final ODI at the Bellerive Oval in Hobart.

A struggling Australian team managed to force a draw in their 5-match ODI Series against Sri Lanka with a comprehensive 32-run win in their do-or-die final ODI at the Bellerive Oval in Hobart on Wednesday. Opener Phil Hughes, who was demoted to no.3 scored the second century of this series to set up the Aussie win. The 5-match ODI Series ended in a 2-2 draw with the crucial fourth ODI abandoned in a controversial manner at the SCG. 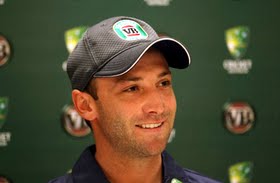 The Aussies went into the match with their Skipper Michael Clarke ruled out because of twisting his ankle during a practice session. For the fifth time in a row, the hosts were batting first, this time asked to do so after losing the toss. It wasn’t hell for leather for the Aussies but they could end up with a competitive total of 247 for 5 thanks to Phil Hughes’ 138 (from 154 balls with 13 fours and a six). David Hussey contributed 34 (from 39 balls). For Sri Lanka, Dilshan who opened the bowling as a surprise move came up with tight figures of 7-3-22-1 while Rangana Herath produced figures of 10-2-34-0 to stifle the scoring rate.

Despite a solid start of 57 for the first wicket, Sri Lanka went down crashing in their run chase of 248. Xavier Doherty and Moises Henriques picked up three wickets each while Clint McKay and Mitchell Johnson took two wickets each to trigger the Lankan collapse. The visitors were bowled out for 215 in 48.3 overs. The main contributors for the Lankans with the bat were Angelo Mathews with 67 (from 79 balls with 7 fours) and Mahela Jayawardene with 38 (from 39 balls).

While the Man of the Match award as expected went to Hughes, the Player of the Series was given to Nuwan Kulasekara for his wonderful seam bowling.