Anamul leads strong Bangladesh A response against Karnataka on Day 2

Bangladesh A responded strongly in their second innings after Karnataka had taken a significant lead on the second day at Mysore in the three-day game. Bangladesh A finished the day on a strong 188 for 3,

Bangladesh A responded strongly in their second innings after Karnataka had taken a significant lead on the second day at Mysore in the three-day game. Bangladesh A finished the day on a strong 188 for 3, leading by 59 runs. Anamul Haque was the star performer smacking 89 at quicker than a run-a-ball. The middle order batsmen also came up with decent efforts as Karnataka's bowlers could not make any kind of impression like they had done in the first innings.

It wouldn't be wrong to say that Anamul did not let the Karnataka bowlers dominate in spite of the fact that the hosts had a pretty good lead to play around with. Anamul hits boundaries at ease in his 89, which came off merely 87 balls, and included 8 fours and as many as five sixes as Karnataka's bowlers seemed clueless. Even as Anamul excelled, Rony Talukdar continued his poor run of form, managing only 15. Skipper Mominul Haque got 22, but was then caught in front of the stumps by Udit Patel. The same bowler accounted for Anamul as well. But, Litton Das (37not out) and Soumya Sarkar (24 not out) ensured Bangladesh A finished in a strong position. 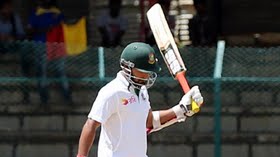 Earlier, resuming the day on 163 for 6, Karnataka extended their innings to 287 thanks to some stubborn resistance from the lower order. Shishir Bhavane and Suchith continued from where they left off on the previous day. The partnership took the score past 200 without much trouble, and beyond. Karnataka's stranglehold was finally broken when Suchith was caught and bowled by Shuvagata Hom for 41. He faced 115 balls and hit five fours. At the other end, Bhavane was looking set for a hundred but fell short of it. He was caught behind off Jubair Hossain for 88, having hit 13 fours and 2 sixes.

Both Suchith and Bhavane fell with the score at 227, but the last two wickets contributed crucial runs. Udit Patel was the key, hitting a fluent 40 from 60 with three fours and as many sixes, before he was sent back by Saqlain Sajib. He was last man out as Karnataka finished on 287. For Bangladesh A, Sajib and Hom both finished with four wickets each. Karnataka gained a lead of 129, but Bangladesh A batted very well in their second essay to take the lead.