Ajit Chandila became the first bowler in IPL 2012 to take a hat-trick. His efforts helped Rajasthan Royals to crush Pune Warrirors by 45 runs in Match 60.

Rajasthan Royals secured a huge 45-run win over a hapless Pune Warriors who have now suffered an eight consecutive defeat in IPL 5! Little known 28-year-old off spinner Ajit Chandila from Haryana went onto claim the maiden hat-trick of IPL 5. Chandila’s hat-trick was spread in the 1st and the 3rd overs with his victims being Jesse Ryder, Sourav Ganguly and Robin Uthappa. 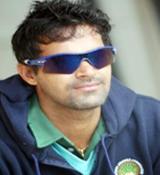 Pune Warriors were further reduced to 60 for 5 in 10.1 overs making it a no contest at the Sawai Mansingh Stadium in Jaipur. With the top score of the innings being just 37 (from 31 balls with 5 fours) from Steven Smith, Pune Warriors asked to chase 171 struggled to reach 125/9 in the allotted 20 overs.

Ajit Chandila with 4 for 13 in 4 overs was the obvious choice for the Man of the Match award. Shane Watson and Johan Botha too did a commendable job taking two wickets each for the homeside. With this victory, Rajasthan Royals find themselves in the sixth position with 14 points in as many matches.