An exciting contest is expected as Kolkata Knight Riders face Royal Challengers Bangalore in match number 48 of the Indian Premier League on Monday. Both sides will go into the contest on a high.

An exciting contest is expected as Kolkata Knight Riders face Royal Challengers Bangalore in match number 48 of the Indian Premier League on Monday. Both sides will go into the contest on a high. While Bangalore decimated Gujarat Lions by a record 144-run margin in their previous encounter at home, Kolkata registered an equally comprehensive victory against a hapless Rising Pune Supergiants, by eight wickets, thus dumping the unimpressive debutants out of the tournament. As Bangalore and Kolkata face each other, they will be keen to continue their winning run.

Although Bangalore won the previous contest against Lions rather spectacularly, they still have a tough task on hand. They need to win all their remaining games to be assured of a berth in the final four. A slip in any of the matches from hereon will put their chances in severe jeopardy. Bangalore find themselves in a precarious position since their bowlers have let them down on numerous occasions this season. In contrast, Kolkata need to register just one more win to ensure that are through to the last four. They have a couple of games in hand, but KKR would want to get it done with against Bangalore itself.

On Saturday, Bangalore's victory was built around two sensational hundreds from two of the most destructive batsmen in the format -- AB de Villiers and Virat Kohli. Bangalore are lucky that both are playing for the same team, for when they fire it is near impossible to stop them. This has happened on more than one occasion in this edition, but on Saturday at Bangalore, Kohli and de Villiers took their game to a completely different level, smashing scintillating hundreds, and making the opposition look like club bowlers. The massive partnership, in a T20 game, was unreal in every sense.

It is difficult to fathom that Bangalore are still not in a great position to qualify for the final four despite having de Villiers and Kohli in such rip-roaring form. The Bangalore skipper in fact has slammed three hundreds in the tournament already. But, this is where Bangalore's bowlers have let them down, being unable to defend scores in the region of 190 on a number of occasions. They set the record straight to an extent with an impressive effort against Gujarat. Chris Jordan finally got his act together with 4 for 11 while Yuzvendra Chahal claimed 3 for 19. 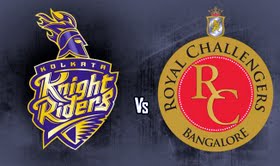 The challenge for Kolkata's bowlers will be to stop the RCB batting juggernaut. As for Bangalore batsman, the case will be vice versa. Morne Morkel has done well in most games that he has played. Andre Russell has been getting the early breakthroughs for the team while the spinners in Piyush Chawla, Shakib Al Hasan and Sunil Narine have also excelled. Although Gautam Gambhir and Robin Uthappa fell cheaply in the previous match, they have been among the runs in most games. Yusuf Pathan has got roaring in the last couple of matches while Manish Pandey too has been consistent.