Sanjay Manjrekar may have termed him a bit and pieces player, but India legend Sachin Tendulkar feels India could explore all-rounder Ravindra Jadeja at the number

Sanjay Manjrekar may have termed him a bit and pieces player, but India legend Sachin Tendulkar feels India could explore all-rounder Ravindra Jadeja at the number seven slot in the semi-finals against New Zealand as he can contribute in multiple departments. India faces New Zealand In the first semi-final at Manchester on Tuesday.

Speaking to India Today, Tendulkar explained his rationale. "Jadeja is one option I would like to throw on the table to team management. I feel if Dinesh Karthik is going to bat at No. 7 then possible Jadeja could be an option there because his left-arm spin can come in handy. In a big match, you would want a cover-up because we are playing just 5 bowlers." 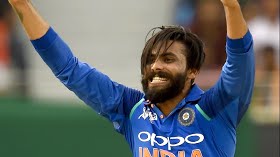 Tendulkar felt Mohammad Shami could also be brought back as he had a good game against West Indies. "I would also be tempted to bring back Mohammed Shami because against West Indies he was good at the same venue. When we talk about Old Trafford there are pleasant experiences for Shami, he came back into the team and picked up wickets. So I would be tempted to have him back," the former India captain added.

The Indian legend, speaking from experience, stated although the players may not be showing it at the exterior, they are under intense pressure as this is the semi-finals after all.

"Pressure will be there, it is going to be a constant companion. There are those pressure moments, you just have to absorb them and we have players in our team who are good at that. It is just about winning those close moments," Tendulkar further told India Today

On whether India should try anything different for the semi-finals, the great added that Virat Kohli and his men should stick to what has been working for them so far.

"If we can stick to our brand of cricket, we don't need to compare ourselves with anyone. I would like to tell them when you play New Zealand and hopefully after that, stick to your brand of cricket. All the build-up that is happening is outside the team, within the team it is about preparation," Tendulkar explained.

India will be facing New Zealand for the first time in World Cup history. While India goes in having topped the group, New Zealand head into the knockouts on the back of three consecutive losses.