Winning Test matches is what it's all about: Broad on 500 Test victims

England medium-pacer Stuart Broad has described crossing the 500-Test wicket milestone as an amazing feeling. Broad dismissed West Indies opener Kraigg Brathwaite in the third Test as England came back from a 0-1 deficit to claim the series 2-1. In an amazing co-incidence, James Anderson had also got rid of Brathwaite three years ago to reach 500 wickets in Tests.

When he trapped the West Indies opener lbw, Broad became only the seventh bowler in the history of the sport to claim 500 Test wickets. "It's special to get the 500, amazing, and what makes it extra special is taking it in a Test match which has led to a win and Test series win. I think you always remember moments as a player when winning games. Winning Test matches is what it's all about," the England pacer told Sky Sports. 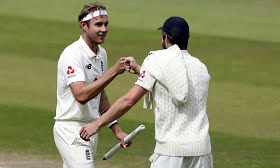 34-year-old Broad ended the series with 16 wickets at an average of just under 11 despite being controversially dropped for the first Test. Broad stated that not playing white-ball cricket has helped his cause in the longer version.

"I was disappointed when I stopped paying white-ball cricket for England but I think that is paying dividends now. I have been fortunate with my injury record and I think that has played a bit part in that," he added.

"I feel fresh and excited every time I put the England cap on and get into a Test series. I have also done some technical work that makes me feel in a great rhythm. I feel very privileged to play as much as I have in the era I have and played with the players I have played with," he further told Sky Sports.

Due to the COVID-19 pandemic, Broad's record came in the absence of fans. His father Chris though was involved as a match referee. "It is a little bit of a shame that after 12, 13 years of playing that my family and friends who have supported me around the world through great days and bad days can't be here to give me a little wave but it was great to have dad here, who looked a bit shy on camera," Broad added.

On Anderson and Broad both getting Brathwaite as their 500th scalp, the latter said it was an incredible stat. "What a stat that is with Brathwaite being both Jimmy's 500th wicket and mine!

Jimmy came to me when we were batting and said 'you know who it is going to be, don't you?'

"I said 'no way, the stars would have to align so much for that to happen!' It was lovely and will be a quiz question in a few years!" the England legend joked.