Having been badly beaten in their opening encounter against New Zealand, Sri Lanka will look to get some points and confidence on the board when they face Afghanistan

Having been badly beaten in their opening encounter against New Zealand, Sri Lanka will look to get some points and confidence on the board when they face Afghanistan. The latter themselves come into the game having gone down to defending champions Australia despite their best efforts.

Against the Kiwis, their batsmen were all at sea as they were crushed by 10 wickets. Except for skipper Dimuth Karunaratne and to an extent Thisara Perera, no one really managed to make any sort of impression on the game. That will have to change against Afghanistan. A lot will be expected from the experienced Angelo Mathews apart from the likes of Lahiru Thirimanne, Kusal Mendis and Kusal Perera.

While one cannot really fault their bowlers much as they had hardly anything to defend, a couple of wickets could have given them some respite. Instead, Colin Munro and Martin Guptill toyed with Sri Lankan bowling and the otherwise effective Lasith Malinga and Suranga Lakmal could not make an impression. Sri Lanka would completely turn things around against Afghanistan. 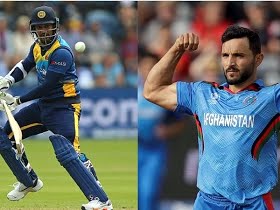 Speaking of Afghanistan, while their defeat was on expected lines it wasn't without their customary fighting spirit. Both the openers fell cheaply in the previous game but they definitely have the ability to be match-winners, Mohammad Shahzad, in particular. Despite the loss, they would be pleased with the manner in which the lower order fought back.

Afghanistan's bowling could not make much of an impact against the Aussies. Hamid Hasan was the only one who was impressive against Australia. However, they have men who can trouble the Lankan batting line-up, which is low o confidence. It will be a good opportunity for Mohammad Nabi and the dynamic Rashid Khan to make an impression.

Sri Lanka would definitely fancy their chances against Afghanistan. However, the latter would want to leave an impression as well with a confident performance.