India skipper Virat Kohli was all praise for Cheteshwar Pujara after his match and series-winning hundred against Sri Lanka at Colombo.

India skipper Virat Kohli was all praise for Cheteshwar Pujara after his match and series-winning hundred against Sri Lanka at Colombo. India defeated Sri Lanka by an innings and 53 runs to win the series 2-0.

Pujara hit hundreds in both Tests. Speaking about the same, Kohli was quoted as saying in an NDTV report, "Pujara and Ajinkya are our two best Test batsmen, especially in the middle order. They've been doing so well consistently. Pujara, I would give him more credit because he only plays one format for India. And to be able to have that hunger and passion day in day out, working hard on his game, coming out and having those consistent performances takes a lot of mental strength.”

Praising Pujara further, he said, "And he's a guy with a lot of mental strength. He obviously has the game. He knows how to score runs, which is the most important thing. He has evolved massively as a cricketer since then. 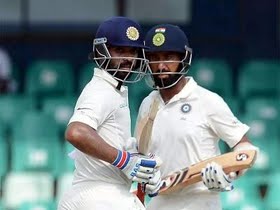 "All of us have, but Pujara's game has gone to another level. If you see last season, continuing now, he's got about 1500 runs which is outstanding,” he went on to say.

On man of the match Ravindra Jadeja, who made 70 in the first innings and picked up five wickets in Sri Lanka's second innings, Kohli said, "Jadeja can give you a very quick 60-70 anywhere at any stage of the game, it can really turn the game. Remember Lord's, remember Dharamsala against Australia, those are very important innings, the 90 against England in Mohali.”