Asked to bat first, T&T struggled losing wickets at regular intervals. First to depart was Lendl Simmons, who dragged a pull onto the stumps off Alister McDermott in the 3rd over. Six balls later, Kemar Roach had Darren Bravo gloving a nasty snorter to the keeper. Four balls later, McDermott had opener Evin Lewis caught at mid wicket to reduce the batting side to 38 for 3.

T&T recovered after the early blows before losing two wickets in the 11th over in successive balls to off-spinner Nathan Hauritz. The Caribbean team slipped to 71 for 5 and a little later to 116 for 9. Fortunately, T&T got to a respectable total of 135 for 9 in the end thanks to Skipper Denesh Ramdin’s efforts of 48 from 38 balls (with 4 fours and 2 sixes). McDermott was the most successful bowler for Brisbane taking 4 for 37. 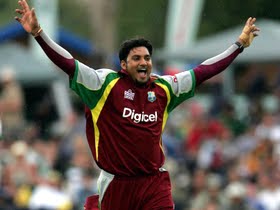 Brisbane Heat had only themselves to blame in not able to chase down the target of 136. The top order in particular Joe Burns batted too slowly and by the completion of the 10th over, the score was 47 for the loss of two wickets. Burns finally got going hitting a couple of sixes but by then Brisbane suffered enough damage losing wickets at regular intervals.

Burns was the top scorer with 45 from 43 balls and when he got out, Brisbane Heat were staring at a defeat at 91 for 6 in 15 overs. Fast bowler Ravi Rampaul did the clean up job for T&T taking 4 for 14 in 3.4 overs. Brisbane Heat collapsed to 110 all out in 18.4 overs. Apart from Rampaul, Rayad Emrit and Sunil Narine chipped in with a couple of wickets each. Leggie Samuel Badree played a crucial role as well by opening the bowling and producing mean figures of 4-0-16-1. Denesh Ramdin got the Man of the Match award for his crucial knock.

Toss and Teams: Brisbane Heat have won the toss and asked Trinidad & Tobago to bat first in the Group B Match at Ranchi. The pitch is expected to be batsmen friendly but because of the rain yesterday, there will be some moisture underneath it to aid the seamers.