Sri Lanka thrashed Australia 3-0 in the recently concluded series. As expected a lot of players from the hosts dominated the statistics. Here’s a closer look at the top performers from the series

Sri Lanka thrashed Australia 3-0 in the recently concluded series. As expected a lot of players from the hosts dominated the statistics. Here’s a closer look at the top performers from the series. 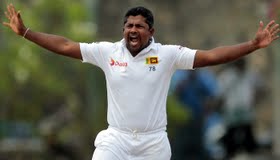 Rangana Herath: The left-arm spinner was the standout performer of the series by some distance. A lot depended on him if Sri Lanka had to perform well. And Herath did not disappoint at all. He was all over the Aussie batsmen, claiming a total of 28 wickets at an excellent average of 12.75. He picked up nine wickets in the opening Test at Pallekele, and six in the second match at Galle. Although he played a supporting role to Dilruwan Perera in the match, he picked up a hat-trick. In the final Test at Colombo, he came up with his most destructive effort, picking up 13 scalps. Without doubt, he was the big difference between the two teams.

Dhananjaya de Silva: He made his debut in the start of the series, and made an instant impression. So good was de Silva, he finished as the series’ top run-getter with 325 runs at an average of 65. He contributed decent knocks of 24, 36, 37 and 34 in the first two Tests, before really coming into his own in the final Test. His 129 in the first innings was instrumental in Sri Lanka putting up a competitive total, and followed it up with an unbeaten 65 in the second essay. Clearly one for the future.

Kusal Mendis: Even though Herath was the man of the series, having dominated two of the three Tests, Mendis undoubtedly played the knock that turned around the fortunes of the series. Until his spectacular counter-attacking 176 at Pallekele, Australia were the dominant side. Post that knock, it was all Sri Lanka. Mendis followed up that memorable hundred with an 86 at Galle, which again was the best innings in the Test, on a tough batting surface. Sri Lanka would be extremely pleased with his emergence.

Dilruwan Perera: The off-spinning all-rounder was superb in the second Test at Galle. He ran through the Aussie batting line-up, picking up 10 wickets at a canter. Perera’s performance in the match also overshadowed Herath’s hat-trick in the same game. Apart from his wickets, Perera also contributed a crucial fifty, making him the first Sri Lankan to claim 10 wickets and score a half-century in a Test. During the course of the match, he also became the quickest from his country to cross 50 Test wickets.

Mitchell Starc: Without any iota of doubt, the only silver lining for Australia in the series, and that says a lot about how poor the visitors were. He finished the series with 24 wickets at an excellent average of 15.16, next only to Herath in the wicket-takers list. The left-arm seamer constantly struck at the top, keeping the Sri Lankan openers on their hooks. The middle order was also troubled by his swing and pace, but the lack of support offered the Lankan batsmen an escape route.