Australia have moved closer towards a Semi Final berth after crushing South Africa comfortably with a 8-wicket win with 14 balls to spare. South Africa are now in a hopeless situation in the tournament having lost two Super Eights games in a row.

Australia have moved closer towards a Semi Final berth after crushing South Africa comfortably with a 8-wicket win with 14 balls to spare. South Africa are now in a hopeless situation in the tournament having lost two Super Eights games in a row.

The Aussies needing to chase a modest target of 147 lost an early wicket of David Warner but steadily got going thanks to the in-form Shane Watson. Michael Hussey coming in at no.3 complemented Watson very well to bat out the Proteas from the game. Watson smacked his way to 70 from 48 balls (with 8 fours and 2 sixes) before departing in the 14th over with his team well placed at 109 for 2. 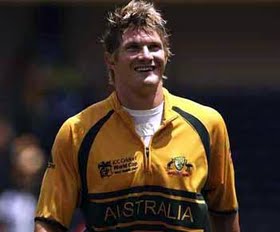 Michael Hussey (45* from 37 balls with 2 fours and 2 sixes) finished the match along with Cameron White who got a bit of confidence with his unbeaten 21 (from 13 balls with 3 fours and a six).

Shane Watson as expected was the Man of the Match for his all-round performance of 4-0-29- 2 and 70. Incredibly he has got this award for the fourth consecutive time in this tournament!

South Africa Innings: South Africa finished with a competitive total of 146 for 5 on a dry pitch at the R Premadasa Stadium. Left-arm spinner Xavier Doherty opening the bowling for the Aussies claimed superb figures of 3 for 20 in 4 overs as the Proteas were struggling to set themselves up for a big total.

The Proteas were in a bad position of 86 for 5 in 14.1 overs when Skipper AB de Villiers got caught at covers off Shane Watson. A 60-run stand for the sixth wicket after that between Farhaan Behardien (31* from 27 balls with 2 fours and a six) and Robin Peterson (32* from 19 balls with 6 fours) helped the Proteas get back in the match.

Toss and Teams: Australia have won the toss and asked South Africa to bat first in the Super Eights Match at the R Premadasa Stadium in Colombo. The Proteas are in a must win situation having lost their first game against Pakistan. Australia on the other hand come after their massive victory over India.