As with any victory, there were plenty of positives for India A from their triumph over West Indies A in the third unofficial Test at Hubli. The win meant the series was level 1-1, but the biggest gain undoubtedly was veteran paceman Zaheer Khan’s match- winning spell.

As with any victory, there were plenty of positives for India A from their triumph over West Indies A in the third unofficial Test at Hubli. The win meant the series was level 1-1, but the biggest gain undoubtedly was veteran paceman Zaheer Khan’s match- winning spell. Khan was aided by the fact that India had put up a massive total in their first innings while replying to West Indies’ mediocre total. There was a cause of concern since he managed to pick only one wicket in the first innings although he struck early. But, Khan got his act together in the second to lead India A to victory. 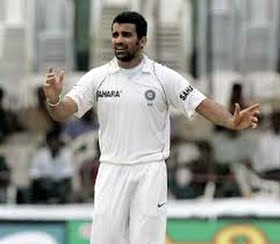 Khan got into the groove slowly but surely. There were indications in the game that he was getting into some kind of rhythm. His spell in the second innings and the manner in which he got his victims were proof of the same. The ball that got rid of Narsingh Deonarine for 99 was sort of magical, the leg cutter that comes in and leaves the batsman at the last moment. It was the delivery Khan bowled so well in international cricket at his peak. Three of his four wickets in the second innings were bowled and one lbw, another definite positive.

Khan’s performance was gladdening no doubt, but he would have to show some consistency with regards to his form and fitness in the coming matches. Meanwhile, there were plenty of other plus points for India A from the match. Nothing was bigger than yet another triple hundred from skipper Cheteshwar Pujara. It is well-known that the Saurashtra lad has a penchant for big scores, and the same was evident during his marathon at Hubli. Pujara batted on for nearly 580 minutes, and rarely looked in trouble during his stay at the crease, a reaffirmation of his growing stature.

More importantly, Gautam Gambhir got a hundred in his game. The axed Test opener has been desperately searching for runs, in the hunt of which he headed to county cricket, but returned home empty-handed. Even in the Challenger Trophy, he put up a poor display. But, at Hubli, his search for a big score finally ended. Of course it did not come against a great bowling attack. That wouldn’t matter to Gambhir at the moment though. He would just be pleased to get some runs under his belt. The southpaw still has a long way to go, and must build on this gain.

Among the other positives for India A from the game, the bowling performance of Abhishek Nayar was top class. He came up with the crucial breakthroughs in both the innings, and played a major hand in setting up the win. Dhawal Kulkarni played a good supporting role as well. The man would who would be most disappointed is Virender Sehwag. He got a start but, unlike Gambhir, did not convert it into a big score. With every failure, Sehwag is forcing the selectors to look away from him. Without doubt, time is running out for Sehwag.