Recently retired Sri Lankan legend Kumar Sangakkara smashed 70 from merely 30 balls as Warne's Warriors outplayed Sachin's Blasters yet again to clinch the three-match T20 series 2-0 at Houston. Thanks to Sangakkara's magic, Warne's team finished with an imposing 262 for 5 on the board. Sachin's Blasters needed to chase down the target to stay alive in the series. But, they managed only 202 to lose the game by 57 runs, and with it the series as well.

Sachin won the toss and decided to bowl first, but the opposition got off to a blazing start. The unlikely combination of Michael Vaughan and Matthew Hayden added 51 foe the first wicket in six overs before Graeme Swann trapped his former skipper lbw for 30. Hayden blasted 32 in 15 balls before playing on to his former teammate Glenn McGrath.

Constant contributions from the rest meant the momentum for Warne's team was maintained. Jacques Kallis survived a close run out opportunity, and went on to make a quick 45. Ricky Ponting was again up to the task, needing only 16 balls for his 41. Andrew Symonds then made an unbeaten 19 from 6, and Jonty Rhodes blasted 18 from 8 as the Warriors finished on a high. Shoaib Akhtar, Glenn McGrath, Shaun Pollock, Lance Klusener, Muttiah Muralitharan and Graeme Swann all went for plenty. 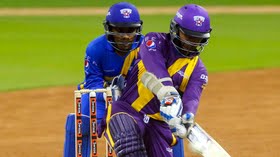 For Sachin's Blasters to have any chance of doing well, they needed Virender Sehwag and Sachin Tendulkar to fire. They did look good, but did not last long enough. Sehwag hit a couple of fours but was bowled by Ajit Agarkar for 16. Sachin lasted longer, making 33 from 20 before old nemesis Saqlain Mushtaq got him. Sourav Ganguly was caught behind off Kallis' bowling for 12 while Brian Lara failed again, bowled by Symonds for 19 from 21.

The wickets continued to tumble for the Blasters as Jayawardene was trapped lbw by Mushtaq for 7. To achieve a miraculous victory, the batting side needed Klusener to turn back the clock, and bring out the devastating form he displayed during the 1999 World Cup. He tried hard, making 21 from 18 before eventually becoming one of Symonds' four victims.

With the result a foregone conclusion, Pollock had some fun, racing to 55 from 22 balls. Swann got 22 from 8. For the Warriors, Symonds finished with bizarre figures of 4 for 70, which included a bouncer delivered to Akhtar.