In the end, Sri Lanka needed only two-and-a-half days to overcome Australia, and clinch the three-match series 2-0. Ever since Sri Lanka gained Test status, they had defeated the Aussies only once,

In the end, Sri Lanka needed only two-and-a-half days to overcome Australia, and clinch the three-match series 2-0. Ever since Sri Lanka gained Test status, they had defeated the Aussies only once, in that famous Test in 1999. Now, they have won two in two. And, the victory at Galle was as emphatic as it can get. Having crushed Australia for 106 in the first innings, the match was always Sri Lanka's. What remained to be seen though was how much fight Australia had in them to try and thwart the Sri Lankans. Unfortunately, it wasn't a lot. Resuming at a precarious 25 for 3, they folded up for 183.

Dilruwan Perera was the shining star for the hosts, picking up 6 for 70 and, in the process, becoming the first Sri Lankan player to take ten wickets and score a fifty in the same Test. Although Rangana Herath got a hat-trick in the same match, the Galle Test will undoubtedly go down in history as Perera's game. Apart from the all-round record, Perera also became the fastest Sri Lankan to reach the milestone of 50 wickets. He needed only 11 Tests to get there. As Perera ran through the Aussie line-up, Herath was content playing the supporting act. Perhaps, the veteran was witnessing the passing of the guard.

Coming back to the Aussies, David Warner who is struggling, like most of his mates, was the first to depart. He was trapped lbw by Perera, playing for the turn when there was none. Warner asked for a review, and ended up wasting one. Skipper Steven Smith went next. On 30, he was caught at bat-pad, also off Perera. This time, the original decision was not out, but Lankans used the review to overturn the on-field verdict. It was the beginning of the end for Australia. Sri Lanka utilised another review to get rid of Mitchell Marsh. On 18, he did not offer a shot to Lakshan Sandakan, and while the batsman got the benefit of the doubt from the human umpire, technology found him out.

Adam Voges hung on gamely for a while and tried a counter-punch with reverse sweeps. But, it was a move fraught with risk, and eventually led to his downfall. On 28, Voges failed to make contact, and was clean bowled by Perera. Only the tail stood between Sri Lanka and a historic victory now. And, it did not take long. 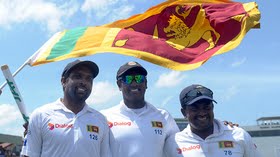 After lunch, Mitchell Starc had some fun hitting a six and three fours, but it did not last long, as he succumbed to Herath, going for another big one. Josh Hazelwood went next giving a simple return catch to Perera, who completed his ten-for. The big moment of joy and grand celebrations came via a run-out. Peter Nevill flicked one and took a couple of steps out of his crease. Kusal Mendis at bat pad swooped on the ball, and got it onto the stumps to catch Nevill short. It was an apt end. As Mendis did with Nevill, so also Sri Lanka, as a team, outsmarted Australia.