It was a fine advertisement for the pink ball. If New Zealand’s inaugural day/night Test had been played with a red ball - not quite so hard and lively - England would probably have escaped

It was a fine advertisement for the pink ball. If New Zealand’s inaugural day/night Test had been played with a red ball - not quite so hard and lively - England would probably have escaped with a draw after almost two days had been lost to rain, and that would have been a grave injustice
Slumping to 27 for 9 before registering their sixth-lowest Test total.
England were far behind New Zealand in every department except wicketkeeping. England’s batting was brainless in the first innings, their fielding was mundane, and their bowling was tepid compared with the heat which New Zealand’s bowlers sustained throughout, especially Trent Boult who was man of the match, and Neil Wagner with his chin-music in England’s second innings.
England have one Test left to try and rescue something. There is a limit to what can be done with a touring squad of 16 and there are those that will say kneejerk reactions don't solve anything. Sometimes, though, you can only continue on one path for so long. Joe Root, himself, said as much before the first Test. 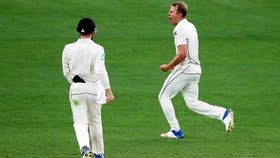 Liam Livingstone, Mark Wood and Jack Leach should all come into contention for Christchurch
While rain forced the game into the final day, Root's side were undone when they were destroyed by a superb display of swing and seam bowling by Trent Boult and Tim Southee in the first 90 minutes and skittled out for a measly 58.
Root's batsmen were crease-bound in the first innings and seemingly unable to get their feet moving against the ball.
"We weren't good enough, simple as that really," Root told reporters. "It's really difficult to get back into a Test match after such a poor start.
"We have to learn some lessons quickly... and we know that we have to adapt better."
England did appear to adapt in the second innings, with their application far better as they were content to bat time rather than look to score.
They lost wickets, however, at crucial times, with three of their second innings wickets falling in the final overs of sessions, which New Zealand captain Kane Williamson said had given his bowlers a boost.
No controversy, just passion. It was there, front and centre, in Neil Wagner's face as he bounced out Ben Stokes and Chris Woakes, but came without a lot of the nonsense seen of late. Of course, there was jousting in the middle; Wagner would repeatedly follow through up close to the batsman and stare them down. There may even have been a few words. But he turned, went back to his mark, and put all his focus on his next delivery. No shoulders were touched.
Wagner wasn't needed in the first innings, such was the demolition job done by Tim Southee and Trent Boult, but the second always felt like an occasion where he would need to come to the fore. On the fourth evening, he bounced out Mark Stoneman from round the wicket, the left-hander top-edging to long leg the delivery after reaching his fifty, but it was on Monday where Wagner went above and beyond for his captain.