Bangladesh all-rounder Shakib Al Hasan reiterated his numero uno status as the World's number one all-rounder by becoming the fastest to 5000 runs and 250 ODI wickets in Bangladesh's clinical win over South Africa at the Kennington Oval on Sunday.

Shakib achieved the feat when he bowled South Africa opener Aiden Markram for 45 in the 20th over of the South African innings to reach the 250-wickets mark. He already has 5,717 runs for Bangladesh in 199 ODIs. 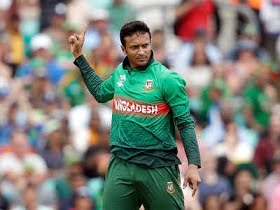 Before shining with the ball, Shakib also starred with the bat. He slammed an enterprising 75 and featured in a century stand with the experienced Mushfiqur Rahim, who contributed 78.

The lower order also fired as Bangladesh posted a daunting 330 against a sloppy South African fielding outfit. The Proteas, despite a promising start, lost their way and ended with 309 for 8. Skipper Faf du Plessis hit a half-century but no one could go on to play the much-needed big knock.

The defeat was South Africa's second in a row following their loss to England. They now face India at Southampton on June 5.