While it is not uncommon for a player to dominate with both bat and ball in Tests and one-dayers, the occurrence is rather rare in T20s. After, a player cannot do a lot when a whole side gets to play 20 overs, and the most somebody can bowl is just four overs

While it is not uncommon for a player to dominate with both bat and ball in Tests and one-dayers, the occurrence is rather rare in T20s. After, a player cannot do a lot when a whole side gets to play 20 overs, and the most somebody can bowl is just four overs. This is why skipper JP Duminy's performance for Delhi Daredevils was a standout one. He played a knock which ensured that Delhi were still in the game when they came out to bowl. With his innocuous off-spinners though he completely turned the game around, and ensured Delhi's IPL 8 only got better. 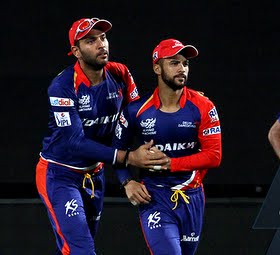 More than his batting, it was his bowling that was instrumental in the team's triumph. Chasing a decent target, Sunrisers had gotten off to a bright start courtesy Shikhar Dhawan and David Warner. But, Duminy came into bowl and completely turned the match around. Yes, complacency set into the Sunrisers batting once Duminy came on to bowl, but the Delhi skipper took full advantage of the same. After all his scalps were those of those of Dhawan, Warner, Ravi Bopara and Eoin Morgan. All of those dismissals came at key moments, and three of them were set batsmen.

Duminy also played a very important knock with the bat. Mayank Agarwal fell early, but Duminy in the company of Shreyas Iyer ensured that Delhi put themselves in a wonderful position to go for the kill in the last few overs. Both batted with great skill. Having said that Delhi should be disappointed with the manner in which they finished. The likes of Yuvraj Singh and the rest could not utilise the great platform, and that cost them some crucial runs.

While Delhi should be disappointed with the way they finished, the bowlers did a very good job. While Duminy was the hero, Nathan Coulter-Nile also chipped in with a very efficient spell. As for Sunrisers, they have only themselves to blame for the loss. Most of their star batsmen including Dhawan, Warner and Bopara got starts, but none of them could take the team past the finish line. Again, Eoin Morgan was a disappointment down the order. A word for praise though for Delhi's Agarwal, who spectacular stop at the boundary towards the end, prevented the match from going in Sunrisers' favour.