Thisara Perera has recently been in the news for wrong reasons as allegations of spot-fixing have surfaced against him and a few other players from Sunrisers Hyderabad.

Thisara Perera has recently been in the news for wrong reasons as allegations of spot-fixing have surfaced against him and a few other players from Sunrisers Hyderabad. Although nothing concrete has come out of it yet, there would have been pressure on the Sri Lankan all-rounder for sure, considering so much has been going on as far as spot-fixing is concerned in India. It was to his great credit that he managed to put all the distractions behind him to lead Sunrisers to victory over T & T in a tough chase.

The task was far from easy for Perera. He walked in with his side in all kinds of trouble and with the required run-rate touching double figures. The Trinidad bowlers were completely dominant over Sunrisers. Under the circumstances, the batting side needed someone to come up with an extremely counterattacking knock to change the equation. Thankfully, Sunrisers had the right man out in the middle, and Perera delivered just what the team needed. It is no secret that he possesses the ability to strike big hits, but the fluency with which he did so on Tuesday was another reminder of his exceptional talent. 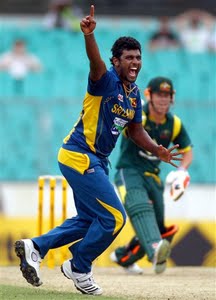 The fact that Perera almost single-handedly pulled off the chase was another indication of his growing maturity as was the confidence which he showed in number eight batsman Karn Sharma, who sealed the tense chase with a six. Some of the shots that Perera played during his innings were of top quality, and actually demotivated the bowlers to the extent that T&T could not stop Sunrisers’ march in spite of Sunil Narine’s sensational spell of 4 for 9. Their poor fielding was another reason why the Caribbean side fell short in the game. They dropped both Perera and Darren Sammy at key junctures in the match.

Even as Perera’s spectacular effort with the bat was the match-turning one, he made a significant impact with the ball as well earlier in the day. Although Trinidad ended up with healthy total, it could have been worse for Sunrisers had Perera not chipped in with a couple of wickets at the end. He and Sammy, just like they did with the bat, combined with the ball as well to help their side recover to an extent after being hammered by the Trinidad batsmen early on in the innings.

While, on one hand, T&T would have been satisfied with the score they got on board batting first, they wouldn’t have been as pleased by the overall batting performance. Apart from Darren Bravo’s elegant half-century, they had only a couple of other starts to show on the scoreboard. Also, the much-needed final flourish was missing in the innings, which cost them severely in the wake of Perera’s brutal assault.