Down 0-1 in the three-match T20 series, South Africa roared back to thump India by nine wickets at Bengaluru and square the series 1-1. Beuran Hendricks

Down 0-1 in the three-match T20 series, South Africa roared back to thump India by nine wickets at Bengaluru and square the series 1-1. Beuran Hendricks stifled India with 2 for 14 in four overs after which skipper Quinton de Kock slammed an unbeaten 79 from 52 balls.

Indian captain Virat Kohli’s decision to see how his troops perform batting first at a venue where chasing is sort of a norm, owing to the small ground, backfired as their batsmen couldn’t find their bearings against a professional South African bowling approach.

India did begin well reaching 54 for 1 at the end of the first power play, with Shikhar Dhawan in full flow. However, the opener’s dismissal at the score of 63 completely stifled the Indians as they were held to a poor 134 for 9 after 20 overs. 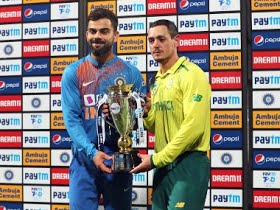 Beuran Hendricks was brilliant as he first took out Rohit Sharma for 9 and then completely strangled the runs in the middle overs along with left-arm spinner Bjorn Fortuin, who claimed 2/19 in 3 overs. And, while Kagiso Rabada was a bit expensive conceding 39 in his four overs, he picked the big scalps of Kohli, Hardik Pandya, and Ravindra Jadeja.

South African captain de Kock paced the chase wonderfully well, striking six fours and as many as five sixes in his unbeaten half-century. He featured in two impressive partnerships -- 76 for the opening wicket with Reeza Hendricks (28) and an unbeaten 64 for the second wicket with Temba Bavuma (27 not out).

After Rohit Sharma fell early having taken a couple of impressive boundaries from Kagiso Rabada’s first over, Dhawan took charge. When leg-spinner Tabraiz Shamsi was introduced into the attack, the left-hander hit him for back-to-back sixes -- the first one over long-on and the second in the opposite direction as he charged down the ground.

Shamsi, however, had his revenge as Dhawan mistimed one and perished for 36 from 25 balls. It opened the floodgates as Kohli was then brilliantly caught by Andile Phehlukwayo running in the deep off Rabada. The struggling Rishabh Pant tried to scoop Dwaine Pretorius over fine leg and perished to the left-arm spinner for the second time in two games. Iyer charged down the wicket very next ball to be stumped off a wide delivery to leave India reeling at 92 for 5. India continued to crumble from there onwards as South Africa ended the T20 series on even terms.