As they have often done in the past, Pakistan once again performed below expectations in the ICC Cricket World Cup 2015.

As they have often done in the past, Pakistan once again performed below expectations in the ICC Cricket World Cup 2015. Apart from the win against South Africa, they did not do much of note. Cricwaves reviews their players' performance.

Ahmed Shehzad (4/10): There has never been any doubt over Shehzad's talent, but he clearly has issues with his temperament. He was out to soft dismissals a number of times after getting starts. In the end, a tally of 227 runs were poor returns. 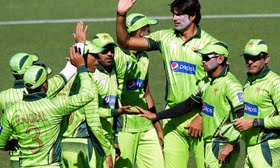 Sarfraz Ahmed (8/10): He was called up late in the tournament, but starred in the win against South Africa with bat and behind the stumps. He also got Pakistan's only hundred in the World Cup. Ahmed managed 160 runs, and Pakistan should have tried him earlier.

Haris Sohail (4/10): He was tried at the number three position, and while he looked fluent out in the middle, he did not get any big scores. A total of 177 runs is anything but impressive.

Misbah-ul-Haq (7/10): As always, Misbah stood up for the team. He finished the tournament with an impressive tally of 350 runs. There was criticism of his slow batting, but with the others in the team struggling, there wasn't much he could really do.

Umar Akmal (2/10): The Pakistan middle-order batsman continued to frustrate. He did not get going at all during the course of the tournament, and finished with only 164 runs in the entire World Cup. Difficult to see him retain his place in the side. Sohaib Maqsood (3/10): Another major disappointment in the batting line-up. Maqsood was given chances throughout, but apart from one fifty, he had nothing to show.

Shahid Afridi (1/10): He had a terrible farewell tournament. He had only 116 runs in the World Cup, playing some typically silly shots. His bowling too was ineffective as he managed only 2 wickets although his economy of 3.5 was impressive.

Wahab Riaz (8/10): He was Pakistan's best bowler by some distance. With 15 wickets at an economy of 5.6, he was mostly asking questions of the batsmen. And, his spell against Shane Watson in the quarter-final has become stuff of legend. He also managed a half-century in one of the games.

Sohail Khan (6/10): He began with a five-for against India, but the series did not end on a very impressive note for Khan. In the absence of Mohammad Irfan, he wasn't as effective. Khan claimed 12 wickets at 6.19.

Rahat Ali (5/10): Ali did reasonably well with the ball, but he unfortunately will be remembered for dropping Shane Watson in the quarters, which cost Pakistan in a big way. Ali claimed 8 wickets at an impressive economy rate of 4.07.

Mohammad Irfan (6/10): The tall left-arm pacer was one of the stars for Pakistan in the triumph over South Africa. Every he came on to bowl, he was a potent force. Unfortunately, he got injured midway through the tournament, and finished with a tally of 8 wickets at an economy of just 4.5.