Australia defeated hosts West Indies by 64 runs in the First Digicel ODI at the Arnos Vale Ground in Kingstown, St. Vincent. The tourists managed the comprehensive victory despite putting up just the 204 runs on board on what was a sluggish pitch. The tourists with this lead the 5-ODI Series 1-0.

Batting first after winning the toss, Australia struggled at 99 for 4 in the 27th over before ending to a respectable 204 for 8. Not a single batsman got a half century for the Aussies. Debutant George Bailey coming in at no.6 top scored with 48 (from 67 balls with 5 fours). Opener David Warner scored 40 from 55 balls with 5 fours at the top. For the West Indies, Dwayne Bravo picked up three wickets but conceded 58 runs. Fast bowler Kemar Roach was the pick of the bowlers with 2 for 33 in 10 overs. 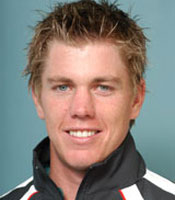 West Indies were derailed in their run chase at 33 for 3 in 11 overs. The hosts never got going and eventually folded to 140 in 32.2 overs. The top scorers for West Indies were Marlon Samuels with 35 (from 58 balls with 2 fours and 3 sixes) and Skipper Darren Sammy with a cameo of 35 (from 20 balls with 3 fours and 3 sixes). Left-arm-spinner Xavier Doherty picked up 4 for 49 but the Man of the Match award instead was given to debutant George Bailey for his 48.