Rajasthan Royals moved up to the first position in the points table after securing their third win of the IPL 5. The Rajasthan Royals thrashed RCB by a margin of 59 runs. Having piled up 195 on the board, the Rajasthan Royals bowled out hosts Royal Challengers Bangalore for just 136 with medium pacer Siddharth Trivedi capturing 4 for 25.

The start for RCB was a promising one until the openers Mayank Agarwal (34 from 21 balls with 3 fours and 3 sixes) and Chris Gayle (8) perished getting out to the tall Pankaj Singh. Soon, the Rajasthan Royals sealed the match by reducing RCB to 78 for 4 in 10.3 overs with the last hopes AB de Villiers and Virat Kohli also failing to come good. It was just a formality after their fall as the RCB gave up in their run chase.

The bowling from the Rajasthan Royals was top class with Pankaj Singh with 2 for 18 in 4 overs, Brad Hogg with 1 for 19 in 4 overs and of course Siddharth Trivedi with his 4 for 25. Centurion Ajinkya Rahane got the Man of the Match award. 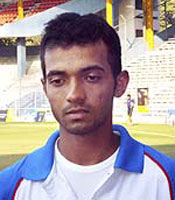 Ajinkya Rahane scored the first century of the IPL 5 and Owais Shah was at his smashing best to power Rajasthan Royals to 195 for 2 against hosts Royal Challengers Bangalore. Rahane who had previously scored 98 in one of the earlier matches got to the three figures this time around. The diminutive Mumbaikar slammed left-arm pacer Sreenath Aravind for six consecutive fours in an over which provided Rajasthan Royals a new found momentum.

Rahane carried his bat through in the Rajasthan Royals innings with 103* from 60 balls with 12 fours and 5 sixes. Owais Shah scored 60 from 26 balls with 5 fours and 5 sixes. Shah got his fifty in just 19 balls. Ironically despite all the carnage, Zaheer Khan managed to get figures of 4-1-15-1!

Toss and Teams: Rajasthan Royals have elected to bat first after winning the toss in their away match at the M Chinnaswamy Stadium against the Royal Challengers Bangalore. Rajasthan Royals have made one change with tall medium pacer Pankaj Singh replacing Ankeet Chavan. RCB have brought in left arm pacer Sreenath Aravind along with India discard Mohammad Kaif in their line up for the first time in the IPL 5.