RR vs SRH: Hyderabad had too few on the board

IPL 8 SH vs RR Match Review: The Rajasthan Royals-Sunrisers Hyderabad encounter may have gone down to the last ball of the match, but Rajasthan always had the upper hand as they were chasing a small score

The Rajasthan Royals-Sunrisers Hyderabad encounter may have gone down to the last ball of the match, but Rajasthan always had the upper hand as they were chasing a small score. Once they had gotten off to a confident start, the result seemed like a mere formality. The bowlers had set up the victory with a brilliant performance on a helpful pitch. Ajinkya Rahane then held things together for Rajasthan, and took them to the doorsteps of victory before perishing. To their credit, Hyderabad's bowlers fought hard, but their batters hadn't given them enough runs. 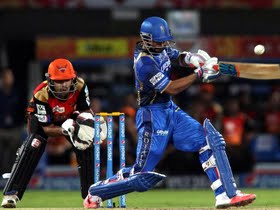 The match was pretty much decided by the manner in which Rajasthan bowled and Hyderabad batted. It is no secret that Hyderabad heavily depend on their openers, skipper David Warner and Shikhar Dhawan. Both of them failed against Rajasthan, and they could not recover after that. The pitch was extremely sluggish and, in spite of the best efforts of Naman Ojha, Eoin Morgan and Ravi Bopara, Hyderabad could not accelerate. The lack of runs they got was clearly their undoing.

Rajasthan's bowlers exploited the conditions brilliantly. Yes, they were extremely lucky with the run out of Warner, but the other wickets were claimed in a deserved manner. Dhawan struggled throughout his brief stay at the crease, and it wasn't surprising that he was taken out with ease by Dhawan Kulkarni. The bowler, who hails from Mumbai, was superb on the day. He bowled a good delivery to get rid of Lokesh Rahul as well, and finished with brilliant figures of 2 for 9.

Kulkarni apart, Pravin Tambe was the other bowler who made a significant contribution. He took out Naman Ojha and Eoin Morgan, and scuttled a partnership that threatened to take them on. Even when they were at the crease, Tambe kept things tight, never allowing them to make any sort of an impact. The overall bowling performance was also impressive with Tim Southee, Chris Morris and Stuart Binny keeping things tight. It was James Faulkner who was surprisingly expensive.

Chasing a low score, Rajasthan needed one decent. And, they got more than that from Rahane who eased his way to a half-century. His partnership with Sanju Samson helped ease matters. And although they would be disappointed that the match went all the way, four wins in four is something they should be proud of.