Bowlers set up easy win for India over Pak

Virat Kohli and Suresh Raina with their solid knocks steered India to a comfortable 7-wicket win with 9 balls to spare against Pakistan at Dhaka.

Virat Kohli and Suresh Raina with their solid knocks steered India to a comfortable 7-wicket win with 9 balls to spare against Pakistan at Dhaka. Chasing 131, India got off to an ideal start of 54 from its openers Shikhar Dhawan and Rohit Sharma which sealed the match from Pakistan.

The first breakthrough for Pakistan came as late in the 8th over when Shikhar Dhawan was caught hooking Umar Gul to long leg after a 28-ball 30. Rohit Sharma departed in the 10th over inside edging a cut off Saeed Ajmal onto the stumps. The match opened up slightly when Yuvraj Singh was bowled by a yorker from Bilawal Bhatti. 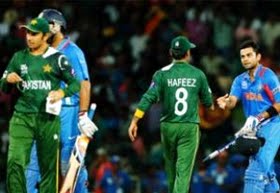 Pakistan simply didn’t have enough runs on the board and in the end it was an easy Indian win. Kohli scored an unbeaten 36 from 32 balls while Suresh Raina scored 35 not out from 28 balls. Leg spinner Amit Mishra for his 4-1-22-2 was named as the Man of the Match.

Pakistan innings: Pakistan batted very nervously to finish with a below par total of 130 for 7 after being asked to bat first by MS Dhoni.

Bhuvneshwar Kumar gave a good start for India by running out Kamran Akmal in the 2nd over off his own bowling. Ravindra Jadeja dismissed the dangerous Mohammad Hafeez in the 8th over with the Pakistani Captain miscuing a big hit off a turning ball. Hafeez consumed 22 balls to score 15 while his team had just 44 runs on the board!

Amit Mishra bowled beautifully to have opener Ahmed Shehzad (22 from 17 balls) stumped out to have Pak at 47 for 3 in 8.2 overs. A 50-run stand between Umar Akmal and Shoaib Malik repaired the early damages but India struck vital blows to ensure that the runs were under control.

Pakistan had a good last over from Shami which was taken for 15 runs by young Shoaib Maqsood who played a crucial cameo of 21 from 11 balls.

Toss and Teams: India has won the toss and opted to bowl first considering that dew will trouble the team bowling in the second half.

India is playing three specialist spinners with the inclusion of Amit Mishra. Only two pacers Mohammed Shami and Bhuvneshwar are in the team. Pakistan are playing an additional pacer in Bilawal Bhatti.

The pitch looks good for batting although the par total is just around 160 as it could take some turn.