Ashwin, Rahul to miss out on IPL 10

Ravichandran Ashwin has been ruled out of the entire IPL 10 season owing to a sports hernia. The offie was scheduled to play for Rising Pune Supergiant

Ravichandran Ashwin has been ruled out of the entire IPL 10 season owing to a sports hernia. The offie was scheduled to play for Rising Pune Supergiant.

According to reports, Ashwin has been advised six to eight weeks rest. He is likely to be fit for the Champions Trophy, which will be held in June.

Another Tamil Nadu player, M Vijay too is in danger of missing out on the complete tournament because of wrist and shoulder injuries. He was to play for Kings XI Punjab. Vijay will require surgery to his right wrist and will also undergo rehabilitation for his left shoulder. Thus, he "may not be able to participate in IPL 2017," according to a BCCI release.

Two more heroes of the India’s long home season, Ravindra Jadeja and Umesh Yadav, will also need a couple of weeks to recuperate from their respective injuries, according to the BCCI. 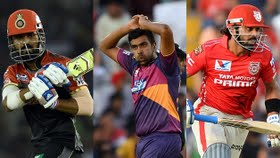 The overworked Jadeja is struggling with his spinning finger while Umesh has soreness in his right hip and lower back. The duo will miss the first two matches of their respective franchises, Gujarat Lions and Kolkata Knight Riders.

Ashwin picked up 82 wickets in 13 Tests during the marathon home season. Jadeja and Ashwin in combination finished the season with 153 wickets.

Royal Challengers Bangalore batsman Lokesh Rahul will also miss IPL 2017 having picked up a shoulder injury during the Border-Gavaskar Trophy. Rahul six fifties in the series against Australia.